You are at:Home »Quotes »70 Team Quotes about the Power of Teamwork

One key element of a successful business lies in efficient and productive teamwork. In fact, good teamwork often proves to be the key to increasing not only revenues but also employee satisfaction. However, while most – if not all – companies seek to build teams that work at a productive maximum, a lot less focus on creating well-balanced teams that act in concert. At the same time, the highest level of productivity may not always be obtainable if a group of individuals with conflicting personalities and agendas is assembled. Instead, what it takes is people that harmonize with each other and individuals that are willing to set their own agendas aside for the good of the company. Even more so, it takes people who are happy to help their colleagues wherever they can so that the entire company can flourish. To celebrate the power of teamwork, we’ve collected the following team quotes.A well-performing team can often be identified by the large commitment of its members. As such, these highly productive teams consist of people who are willing to pick up new and unexpected responsibilities without neglecting their own duties.

Even though it is repeated all the time, only a few fully understand the true power of teamwork. Most do not take into account that a group of people that diligently and cooperatively work together can accomplish a lot more than all the individuals alone. 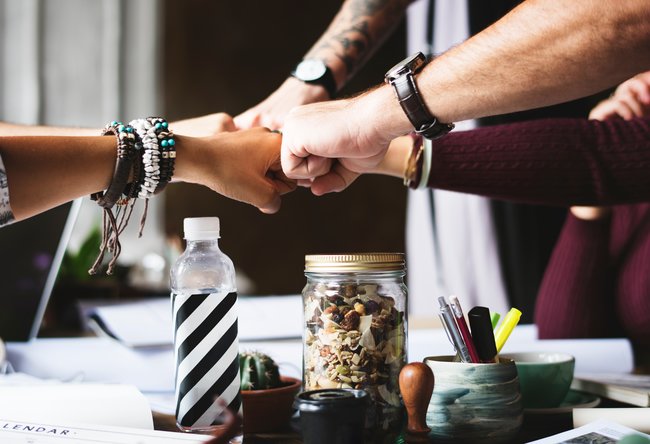 The following team quotes will convince you of the power of teamwork.

For exactly this reason, it is so dangerous to build a team of people who are more concerned about their own promotion instead of the well-being of the company. At the worst, you’re confronted with a team whose members are elbowing each other instead of working together.

To raise awareness for the power of teamwork, the following collection of team quotes was created. Enjoy these powerful statements.

70 Team Quotes about the Power of Teamwork

Team quotes are so inspiring because they stem from individuals who – at one point in their lives – realized that they could accomplish a lot more by working in a productive team. As such, these people have more and more come to cherish the magnificent benefits of teamwork. There inspiring and often quite motivating statements about teamwork show what can be accomplished if a number of people are committed to doing whatever it takes for the other team members.

Here are these inspiring team quotes:

“There is no ‘I’ in team but there is in win.”
Michael Jordan

“To collaborative team members, completing one another is more important than competing with one another.”
John C. Maxwell

“Linked together as a team with one goal, we soon realized we were only as strong as our weakest link. But did we condemn the weaker member? That wouldn’t serve any purpose. Instead, the stronger guys responded by carrying more weight than the weaker teammate.”
Jake Byrne

“With an enthusiastic team you can achieve almost anything.”
Tahir Shah

“Ego is the ultimate killer on a team”
Patrick Lencioni

“I am a member of the team, and I rely on the team, I defer to it and sacrifice for it, because the team, not the individual, is the ultimate champion.”
Mia Hamm

“There is immense power when a group of people with similar interests gets together to work toward the same goals.”
Idowu Koyenikan

“Unity is strength… when there is teamwork and collaboration, wonderful things can be achieved.”
Mattie Stepanek

“In a highly performing team everyone achieves better than he/she would have achieved when working alone.”
Israelmore Ayivor

“When you switch your focus from the “we” to the “me”, the goal from “team” to “self”, you upset the balance of the whole. Consequentially, that redistribution of effort impedes success.”
Carlos Wallace

“We’re a team. It’s part of our job to help each other out, and to forgive each other quickly. Otherwise, we’d never get anything done.”
Jeramey Kraatz

“When you join teams that changes lives, yours will be the first.”
Todd Stocker

“On our own, we are marshmallows and dried spaghetti, but together we can become something bigger.”
C.B. Cook

“Givers reject the notion that interdependence is weak. Givers are more likely to see interdependence as a source of strength, a way to harness the skills of multiple people for a greater good.”
Adam Grant

“If you try and lose then it isn’t your fault. But if you don’t try and we lose, then it’s all your fault.”
Orson Scott Card

“While there is no “I” in team, neither are any of the letters the same.”
Kathryn V. White

“My model for business is The Beatles. They were four guys who kept each other kind of negative tendencies in check. They balanced each other and the total was greater than the sum of the parts. That’s how I see business: great things in business are never done by one person, they’re done by a team of people.”
Steve Jobs

“For when ideas flutter in haze, we collaborate without notice and collect them as butterflies only to set them free into the world.”
Shawn Lukas

“There is no such thing as “healthy” competition within a knowledge organization; all internal competition is destructive. The nature of our work is that it cannot be done by any single person in isolation. Knowledge work is by definition collaborative.”
Tom DeMarco

“On a hard jungle journey nothing is so important as having a team you can trust.”
Tahir Shah

“To become a better you, work in a team of like-minded people and learn new things you don’t know.”
Israelmore Ayivor

“Only by binding together as a single force will we remain strong and unconquerable.”
Chris Bradford

“Collaboration begins with focusing on the collective good rather than personal gain.”
Jane Ripley

“I invite everyone to choose forgiveness rather than division, teamwork over personal ambition.”
Jean-Francois Cope

“A fractured team is just like a broken arm or leg; fixing it is always painful, and sometimes you have to rebreak it to make it heal correctly. And the rebreak hurts a lot more than the initial break because you have to do it on purpose.”
Patrick Lencioni

“Teamwork is the ability to work together toward a common vision. The ability to direct individual accomplishments toward organizational objectives. It is the fuel that allows common people to attain uncommon results.”
Andrew Carnegie

“Organisations are innovating quicker than ever. Your members need to excel from being a team player to a team builder.”
Janna Cachola

“Collaboration has no hierarchy. The Sun collaborates with soil to bring flowers on the earth.”
Amit Ray

“Better to lose with the right team than to win with the wrong team.”
Ogwo David Emenike

“A leader must stand up for his team even when he has to stand alone.”
Farshad Asl

“This world isn’t a battlefield. Someday you will realize how your success depends on a bunch of other people and that day you will be wiser. You will know how connected we all are. Either we all make it or none of us does.”
Jasleen Kaur Gumber

“Rephrase the words “staff members” into team members. Because the people in our team are far more than employees, or colleagues. We are a unit!”
Janna Cachola

“If everyone is moving forward together, then success takes care of itself.”
Henry Ford

“Great teams do not hold back with one another. They are unafraid to air their dirty laundry. They admit their mistakes, their weaknesses, and their concerns without fear of reprisal.”
Patrick Lencioni

“Like a good marriage, trust on a team is never complete; it must be maintained over time”
Patrick Lencioni

“The best teamwork comes from men who are working independently toward one goal in unison.”
James Cash Penney

“To achieve results. This is the only true measure of a team.”
Patrick Lencioni

“Individual commitment to a group effort – that is what makes a team work, a company work, a society work, a civilization work.”
Vince Lombardi

“The beauty of collaboration between older and younger generations is that we combine strength with wisdom – a surefire way to accomplish more for the glory of God.”
Brett Harris

“None of us is as smart as all of us.”
Ken Blanchard

“Be fast, be first, but never be alone. Nothing can replace the value of teamwork.”
Farshad Asl

“Neighbor to neighbor. It is a mentality that has been fostered over centuries, since the earliest settlers realized the only way to survive in this desolate but beautiful outpost was to work together. Much of their music captures this spirit.”
Jim DeFede

“Either we’re a team or we aren’t. Either you trust me or you don’t.”
Ally Carter

“Trust is knowing that when a team member does push you, they’re doing it because they care about the team.”
Patrick Lencioni

“Teamwork is the best ever investment. If I make 3 and you make 5, together we will not make 8. We will make 15. Leaders build active teams.”
Israelmore Ayivor

“Phrases like ‘the team spirit’ are always employed to cut across individualism, love and personal loyalties.”
Muriel Spark

“Working together for a great mission is very fulfilling!”
Lailah Gifty Akita

“I have always believed in the power of collaboration. Early on in my professional career, I realized that you can’t develop all the competencies you need fast enough on your own. Furthermore, if you don’t collaborate, your ideas will be limited to your own abilities. As a result, you will not be able to serve your clientele and thus can’t achieve the anticipated impact.”
Vishwas Chavan

“I have always believed in the power of collaboration. Early on in my professional career, I realized that you can’t develop all the competencies you need fast enough on your own. Furthermore, if you don’t collaborate, your ideas will be limited to your own abilities. As a result, you will not be able to serve your clientele and thus can’t achieve the anticipated impact.”
Vishwas Chavan

“Remember teamwork begins by building trust. And the only way to do that is to overcome our need for invulnerability.”
Patrick Lencioni

“The struggles we endure today will be the ‘good old days’ we laugh about tomorrow.”
Aaron Lauritsen

“Telling your team what to do is showmanship. Showing people how to do it is leadership. Leading for the purpose of visual effect will not accomplish the vision.”
Janna Cachola

“Working together as a team helps build a cohesive organization.”
Ifeanyi Enoch Onuoha

“We can only reach the highest height, if we encourage each other.”
Lailah Gifty Akita

I hope you enjoyed reading this collection of inspirational team quotes. Do you prefer to work in a team or are you more productive on your own?