Each year, Memorial Day reminds us that freedom truly is not free. The three-day weekend gives us a pause to reflect and to realize that many paid with their lives for our freedom. In remembrance of the fallen troops who died in service, the last Monday on May marks a time of giving thanks and being grateful. It is a time of remembering the great sacrifice of the fallen soldiers. In honor of those who gave their life in military service to protect our freedom, we’ve created the following collection of Memorial Day quotes.

Sometimes, it seems as if surprisingly many people have forgotten what the actual purpose behind Memorial Day is. To them, Memorial Day is a three-day weekend that is all about having barbecues and getting great shopping deals.

“I only regret that I have but one life to lose for my country.”
Nathan Hale

Memorial Day, however, is much more than a welcome opportunity to hunt for great deals in your local mall. The holiday helps us to remember how privileged we really are. It shows us that millions fought for the peace and freedom we can enjoy in our lives. Memorial Day also reminds us how precious freedom is and that it needs to be guarded closely. There are many ways to celebrate Memorial Day. For instance, you could attend a parade or decorate the grave of a fallen soldier you knew. 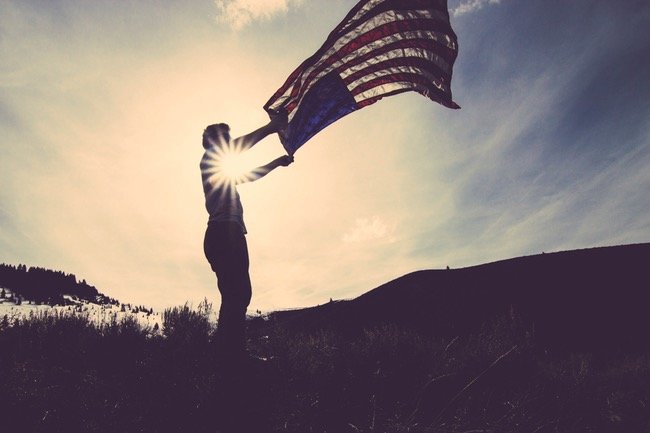 Enjoy the following collection of Memorial Day quotes in honor of those who died in service.

If you’re looking for some inspiration about what this special holiday is all about, reading a couple of Memorial Day quotes may prove to be quite helpful.

The following Memorial Day quotes will quickly show you why observing this federal holiday is so important. These statements from presidents, veterans, and patriots honor those that have fallen in service to their country and highlight the greater good they were fighting for.

“Honor to the soldier and sailor everywhere, who bravely bears his country’s cause. Honor, also, to the citizen who cares for his brother in the field and serves, as he best can, the same cause.“
Abraham Lincoln

“We cherish too, the Poppy red that grows on fields where valor led, it seems to signal to the skies that blood of heroes never dies.“
Moina Michael

“The highest obligation and privilege of citizenship is that of bearing arms for one’s country“
George S. Patton Jr.

“Finally, I wish to remember the millions of Allied servicemen and prisoners of war who lived the story of the Second World War. Many of these men never came home; many others returned bearing emotional and physical scars that would stay with them for the rest of their lives. I come away from this book with the deepest appreciation for what these men endured, and what they sacrificed, for the good of humanity.“
Laura Hillenbrand

“Liberty is never unalienable; it must be redeemed regularly with the blood of patriots or it always vanishes. Of all the so-called natural human rights that have ever been invented, liberty is least likely to be cheap and is never free of cost.“
Robert A. Heinlein

“Tonight, when you go to bed, say a prayer that God watch over those who watch over us, and thank them for their sacrifices, on and off the battlefield. Pray that they have a peaceful night, and will be home soon with their families who also share their burden. Without them, we would not have this moment.“
Neil Leckman

“Patriotism is supporting your country all the time, and your government when it deserves it.“
Mark Twain

“We sleep safely at night because rough men stand ready to visit violence on those who would harm us.“
Winston S. Churchill

“Have you ever stopped to ponder the amount of blood spilled, the volume of tears shed, the degree of pain and anguish endured, the number of noble men and women lost in battle so that we as individuals might have a say in governing our country? Honor the lives sacrificed for your freedoms.“
Richelle E. Goodrich

“Our obligations to our country never cease but with our lives.“
John Adams

“Never in the field of human conflict was so much owed by so many to so few.“
Winston S. Churchill

“In the aftermath, we are because they were.“
RJ Heller

“Do not forget that the armed forces are the servants of the people. You do not make national policy; it is we, the civilians, who decide these issues and it is your duty to carry out these tasks with which you are entrusted.“
M. A. Jinnah

“The mystic chords of memory, stretching from every battle-field, and patriot grave, to every living heart and hearth-stone, all over this broad land, will yet swell the chorus of the Union, when again touched, as surely they will be, by the better angels of our nature.“
Abraham Lincoln

“Heroes may not be braver than anyone else. They’re just braver 5 minutes longer.“
Ronald Reagan

“This country has not seen and probably will never know the true level of sacrifice of our veterans. As a civilian, I owe an unpayable debt to all our military. […] Let’s all take a remembrance for all veterans who served or are serving, peacetime or wartime and gone or still with us.“
Thomas M Smith

“In the face of impossible odds, people who love this country can change it.“
Barack Obama

“War brings out the kind of pride in a country that encourages its citizens in the direction of excellence and it encourages them to be ready to die for it. At no time do people work so well together to achieve the same goal as they do in wartime.“
Andy Rooney

“That’s what any committed patriot would do: Fight to the last. Defeat your enemy at any cost; then hope you have enough left to rebuild.“
Randolph D. Calverhall

“People sleep peaceably in their beds at night only because rough men stand ready to do violence on their behalf.“
George Orwell

“My own heroes are the dreamers, those men and women who tried to make the world a better place than when they found it, whether in small ways or great ones. Some succeeded, some failed, most had mixed results… but it is the effort that’s heroic, as I see it. Win or lose, I admire those who fight the good fight.“
George R.R. Martin

“Most have been forgotten. Most deserve to be forgotten. The heroes will always be remembered. The best.“
George R.R. Martin

“The events of that day would forever be remembered, and they stood together as a united Marridon, a nation that would lead in innovation and liberality, taking up the thread that had been left for them, the essence of selfless love woven along a national loom.“
Michelle Franklin

“… It is a proud privilege to be a soldier – a good soldier … [with]discipline, self-respect, pride in his unit and his country, a high sense of duty and obligation to comrades and to his superiors, and a self-confidence born of demonstrated ability.“
George S. Patton Jr.

“Only the dead have seen the end of war.“
Plato

“Patriotism is the virtue of the vicious“
Oscar Wilde

“My country owes me nothing. It gave me, as it gives every boy and girl, a chance. It gave me schooling, independence of action, opportunity for service and honor.“
Herbert Hoover

“Soldiers themselves are reluctant to evaluate the costs of war, but someone must. That evaluation, ongoing and unadulterated by politics, may be the one thing a country absolutely owes the soldiers who defend its borders.“
Sebastian Junger

“Damn the wars but bless the soldier.“
T.L. Moffitt

“Loyalty to country always. Loyalty to government, when it deserves it.“
Mark Twain

“It is not enough to win a war; it is more important to organize the peace.“
Aristotle

“It is foolish and wrong to mourn the men who died. Rather, we should thank God that such men lived.“
George S. Patton Jr.

“You can have peace. Or you can have freedom. Don’t ever count on having both at once.“
Robert A. Heinlein

“America’s finest – our men and women in uniform –are a force for good throughout the world, and that is nothing to apologize for.“
Sarah Palin

“Your country is proud of you.“
C.J. Hatch

“Serving my country was a life-changing experience for me. It was during those years that I realized the importance of commitment, dedication, honor, and discipline. I have never laughed so much; nor have I ever prayed so much. I made life-long friends. The leaders and heroes I served with helped shape me into the man I am today. I feel honored to have been a part of such a great tradition and grateful to others who have walked the same path.“
Steve Maraboli

“They were all in and they were all together, one nation, under God, indivisible, with liberty and justice for all.“
Bob Richardson

“Life, Liberty, and the pursuit of those who threaten it.“
U.S. Department of the Navy

“It may sound corny, but what’s wrong with wanting to fight for your country. Why are people reluctant to use the word patriotism?“
Jimmy Stewart

“To be heroic is to be courageous enough to die for something.“
Criss Jami

“My old man says when it’s time to be counted, the important thing is to be man enough to stand up.“
Robert A. Heinlein

“To the veterans of the United States of America: Thank you, for the cost you paid for our freedom, thank you for the freedom to live in safety and pursue happiness, for freedom of speech (thus my book), and for all the freedoms that we daily take for granted.“
Sara Niles

“No soldier outlives a thousand chances. But every soldier believes in Chance and trusts his luck.“
Erich Maria Remarque

“Heroes are made by the paths they choose, not the powers they are graced with.“
Brodi Ashton

“I venture to suggest that patriotism is not a short and frenzied outburst of emotion, but the tranquil and steady dedication of a lifetime.“
Adlai E. Stevenson II

“And when all the wars are over, a butterfly will still be beautiful.“
Ruskin Bond

“Great heroes need great sorrows and burdens, or half their greatness goes unnoticed. It is all part of the fairy tale.“
Peter S. Beagle

“The birthplace of anarchy is the cemetery of freedom.“
Craig D. Lounsbrough

“Unhappy the land that is in need of heroes“
Bertolt Brecht

“So, let us summon a new spirit of patriotism, of responsibility, where each of us resolves to pitch in and work harder and look over not only ourselves but each other.“
Barack Obama

“My kind of loyalty was loyalty to one’s country, not to its institutions or its officeholders. The country is the real thing, the substantial thing, the eternal thing; it is the thing to watch over, and care for, and be loyal to; institutions are extraneous, they are its mere clothing, and clothing can wear out, become ragged, cease to be comfortable, cease to protect the body from winter, disease, and death.“
Mark Twain

I hope you enjoyed reading through this collection of Memorial Day quotes. Let us know in the comment section what your favorite quote is.