You are at:Home »Quotes »The 55 Greatest Military Quotes of All Time

Sadly, war is sometimes inevitable. While nobody liked the idea of having to leave their family, millions upon millions of our ancestors, friends, and fellow citizens have taken up arms to defend their country. It is for these brave soldiers and veterans that the threats our country has faced did not destroy our freedom and liberty. Even more so, it is for the military men who sacrificed their lives that we can still live in a free and prosperous society. Among many other things such as military monuments and parades, military quotes can help us to honor those who have fallen in service to their country. By honoring those who sacrificed their lives for our freedom, we can make sure that their brave deeds will not be forgotten. In fact, remembrance of the unselfish deeds of military men but also the heartbreaking costs of war can help to avoid unnecessary wars in the future. For this reason, we’ve created the following selection of some of the greatest and most powerful military quotes of all time. (See also our collection of Memorial Day Quotes).

Powerful military quotes remind us that freedom does not come for free.

“The soldier is the Army. No army is better than its soldiers. The Soldier is also a citizen. In fact, the highest obligation and privilege of citizenship is that of bearing arms for one’s country”
George S. Patton Jr.

Even more so, these statements by true patriots, military leaders, and statesman help us to become aware of great price so many had to pay for our present day’s freedom. 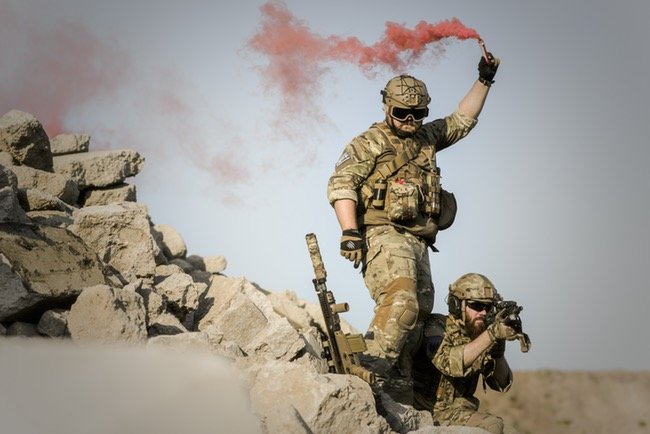 The following collection of military quotes honors the brave deeds of our troops.

At the same time, military quotes also make us aware how precious and how privileged we are to live in a free society. But they also highlight how important it is to never allow external forces to take that freedom away from us.

The 55 Greatest Military Quotes of All Time

The following military quotes will show you why it is so important to never forget about those to whom we owe our independence and freedom. Even more so, these statements from true patriots under all those who have fallen in service to their country.

Here is our collection of powerful and military quotes 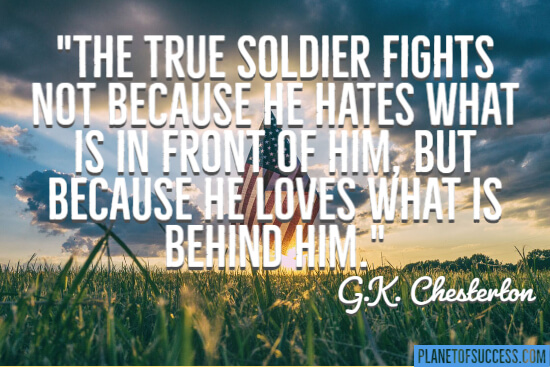 “The only easy day was yesterday.”
US Navy SEALs 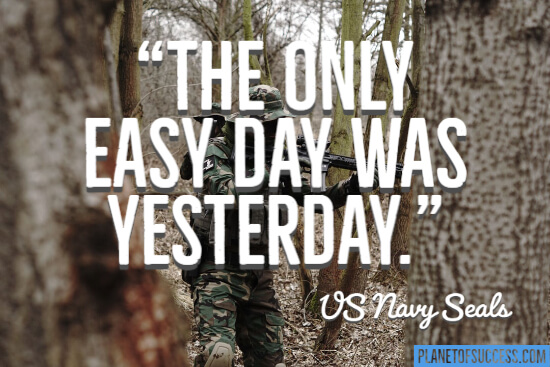 “It is a proud privilege to be a soldier – a good soldier [with]discipline, self-respect, pride in his unit and his country, a high sense of duty and obligation to comrades and to his superiors, and a self-confidence born of demonstrated ability.”
George S. Patton Jr. 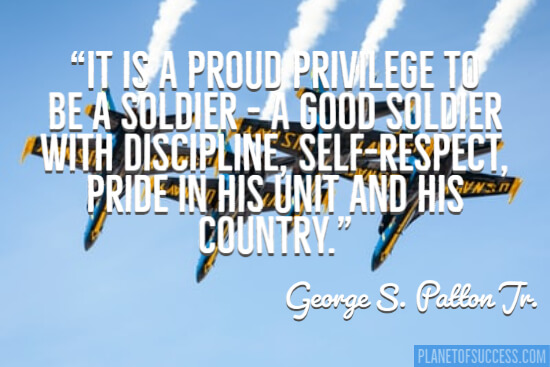 “We sleep peaceably in our beds at night only because rough men stand ready to do violence on our behalf.”
George Orwell 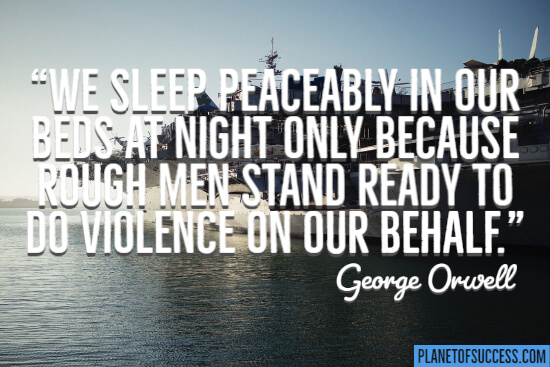 “I can imagine no more rewarding a career. And any man who may be asked in this century what he did to make his life worthwhile, I think can respond with a good deal of pride and satisfaction: ‘I served in the United States Navy.”
John F. Kennedy 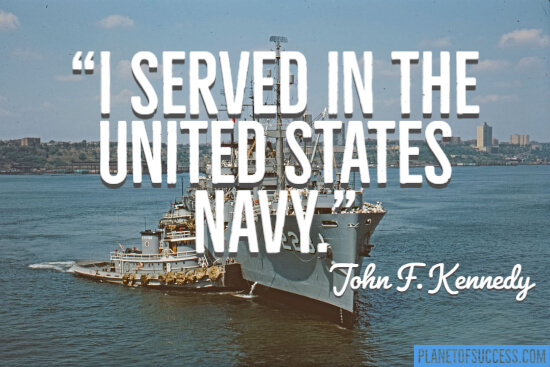 “For the first time in a long time, I felt like I had a purpose being in the Navy. It wasn’t about money and rank or prestige. It was about raising the flag. We do what we do because no one else can or will do it. We fight so others can sleep at night. And I had forgotten that.”
Timothy Ciciora 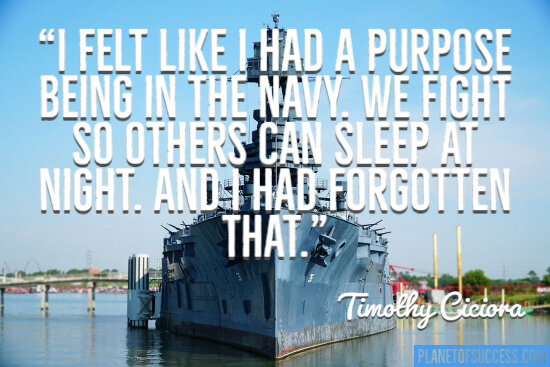 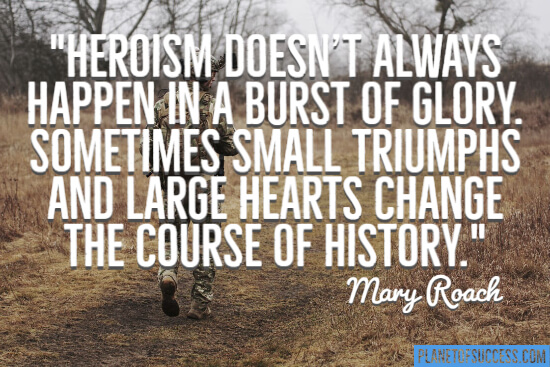 “You can have peace. Or you can have freedom. Don’t ever count on having both at once.”
Robert A. Heinlein 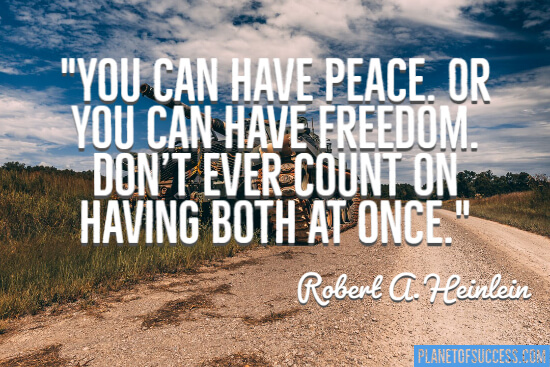 “This country has not seen and probably will never know the true level of sacrifice of our veterans. As a civilian, I owe an unpayable debt to all our military. Going forward let’s not send our servicemen and women off to war or conflict zones unless it is overwhelmingly justifiable and on moral high ground.”
Thomas M. Smith 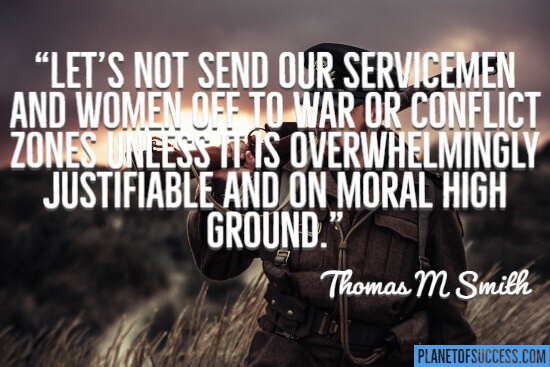 “War must be, while we defend our lives against a destroyer who would devour all; but I do not love the bright sword for its sharpness, nor the arrow for its swiftness, nor the warrior for his glory. I love only that which they defend.”
J.R.R. Tolkien 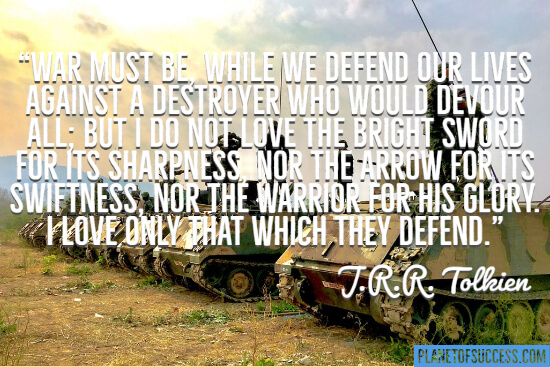 “We sleep safely at night because rough men stand ready to visit violence on those who would harm us.”
Winston S. Churchill 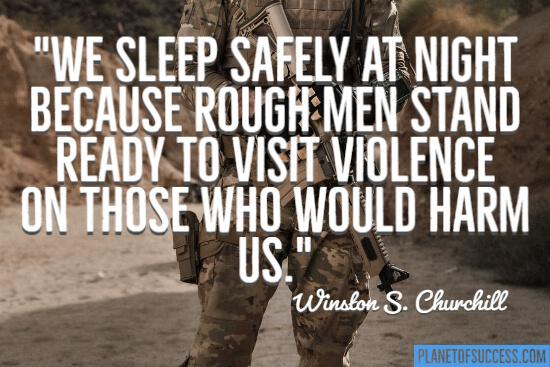 “Whoever said the pen is mightier than the sword obviously never encountered automatic weapons.”
Douglas MacArthur 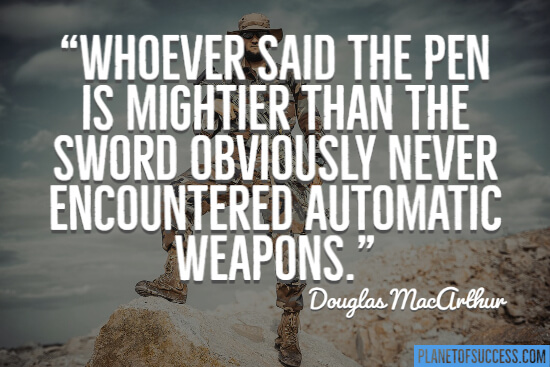 “America without her Soldiers would be like God without His angels.”
Claudia Pemberton 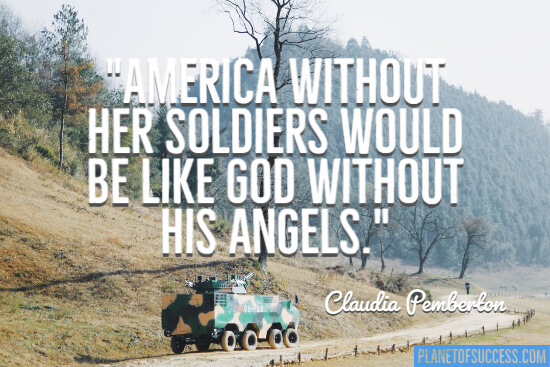 “Out of every one hundred men, ten shouldn’t even be there, eighty are just targets, nine are the real fighters, and we are lucky to have them, for they make the battle. Ah, but the one, one is a warrior, and he will bring the others back.”
Heraclitus 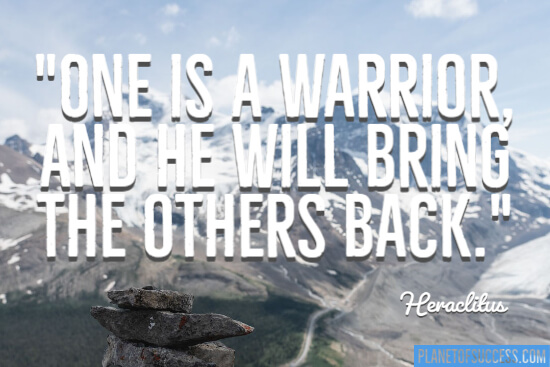 “It is foolish and wrong to mourn the men who died. Rather, we should thank God that such men lived.”
George S. Patton Jr. 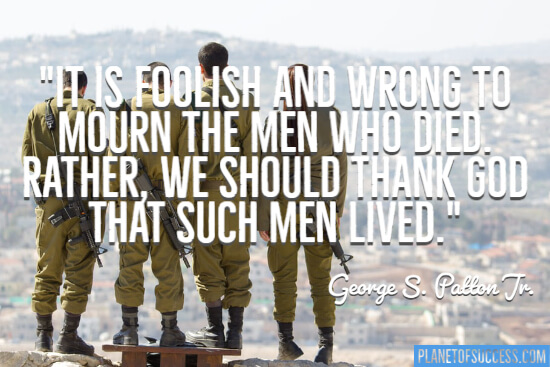 “War is the greatest evil Satan has invented to corrupt our hearts and souls. We should honor our soldiers, but we should never honor war.”
Dean Hughes 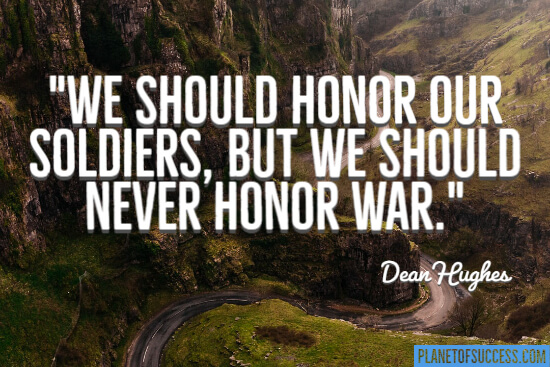 “It was not about physical strength, Wit reminded himself. It was 90 percent mental, 10 percent physical. That’s what the SEAL instructors were looking for: men and women who could disregard the pleadings of the body. Pain was nothing, sleep was nothing. What was chaffed skin, wrecked muscles, bleeding sores? The body chooses to be sore. The body chooses to be exhausted. But the SEAL mind rejects it. The SEAL mind commands the body, not the other way around.”
Orson Scott Card 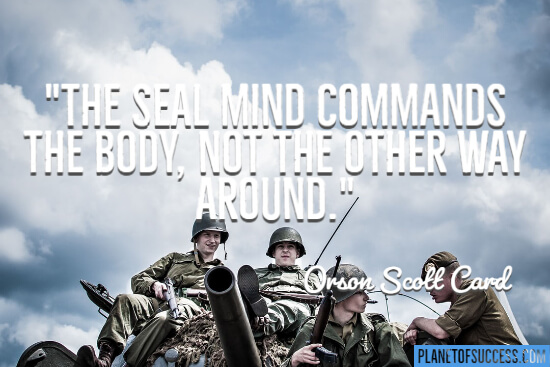 “Today we say goodbye to a proud warrior. As we leave, each of us will take our members of [the USS]Midway with us… you guys were the ‘Magic.’ It was a privilege to sail with you.”
John Schork 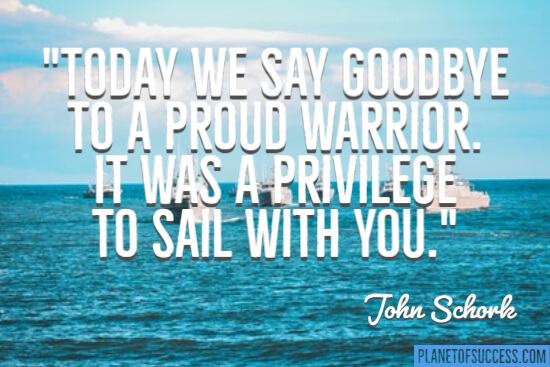 “The music at a wedding procession always reminds me of the music of soldiers going into battle.”
Heinrich Heine 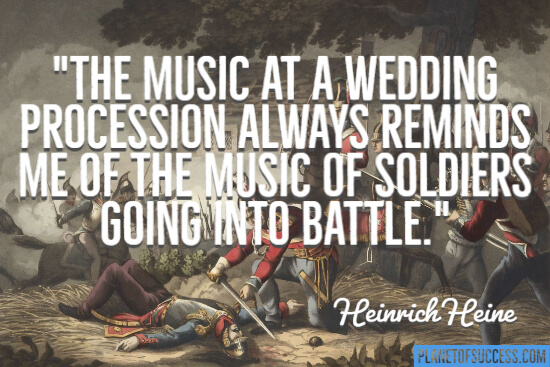 “Every gun that is made, every warship launched, every rocket fired signifies in the final sense, a theft from those who hunger and are not fed, those who are cold and are not clothed. This world in arms is not spending money alone. It is spending the sweat of its laborers, the genius of its scientists, the hopes of its children. This is not a way of life at all in any true sense. Under the clouds of war, it is humanity hanging on a cross of iron.”
Dwight D. Eisenhower 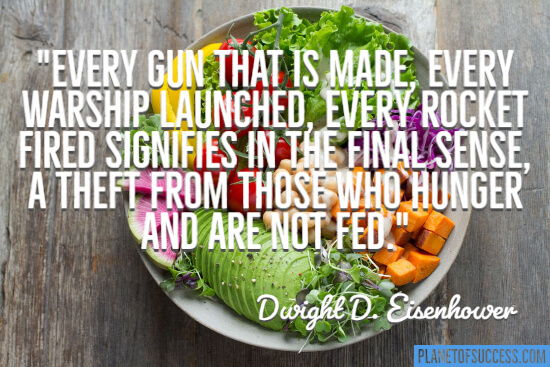 “I did two things on my seventy-fifth birthday. I visited my wife’s grave. Then I joined the army. Visiting Kathy’s grave was the less dramatic of the two.”
John Scalzi

“I’m fed up to the ears with old men dreaming up wars for young men to die in.”
George S. McGovern

“She had been proud of his decision to serve his country, her heart bursting with love and admiration the first time she saw him outfitted in his dress blues. „
Nicholas Sparks

“Kropp, on the other hand, is a thinker. He proposes that a declaration of war should be a kind of popular festival with entrance-tickets and bands, like a bull fight. Then in the arena, the ministers and generals of the two countries, dressed in bathing-drawers and armed with clubs, can have it out on themselves. Whoever survives the country wins. That would be much simpler and more than just this arrangement, where the wrong people do the fighting”
Erich Maria Remarque

“Hopefully one-day Wars will only be fought in movies. And may the best producer win!”
Stanley Victor Paskavich

“Loyalty to country ALWAYS. Loyalty to government, when it deserves it.”
Mark Twain

“A safe army is better than a safe border”
B.R. Ambedkar

“The reason we call ships ‘she’ is that it costs so much to keep one in paint and powder.”
Chester W. Nimitz

“I am concerned for the security of our great Nation; not so much because of any threat from without, but because of the insidious forces working from within.”
Douglas MacArthur

“There were many, many times thereafter that Don regretted having enlisted – but so has every man who ever volunteered for military service.”
Robert A. Heinlein

“A soldier’s life revolves around his mail. Like many others, I’ve been able to follow my kid’s progress from the day he was born until now he is able to walk and talk a little, and although I have never seen him I know him very well.”
Bill Mauldin

“Only the dead have seen the end of war.”
Plato

“We live in a world that has walls and those walls need to be guarded by men with guns.”
Aaron Sorkin

“America’s finest – our men and women in uniform, are a force for good throughout the world, and that is nothing to apologize for.”
Sarah Palin

“There has seldom if ever a shortage of eager young males prepared to kill and die to preserve the security, comfort and prejudices of their elders, and what you call heroism is just an expression of this simple fact; there is never a scarcity of idiots.”
Iain Banks

“Soldiers can sometimes make decisions that are smarter than the orders they’ve been given.”
Orson Scott Card

“War is life multiplied by some number that no one has ever heard of.”
Sebastian Junger

“Battles are won by slaughter and maneuver. The greater the general, the more he contributes in maneuver, the less he demands in slaughter.”
Winston S. Churchill

“Listen up – there’s no war that will end all wars.”
Haruki Murakami

“And then, when I thought about joining the Air Force, flying seemed like a natural extension of the motorcycling experience. You’re going faster, higher. You’re operating a machine that’s a lot more powerful than you are.”
Duane G. Carey

“No man is a man until he has been a soldier.”
Louis de Bernières

“Do not swallow bait offered by the enemy. Do not interfere with an army that is returning home.”
Sun Tzu

“It is fatal to enter a war without the will to win it.”
Douglas MacArthur

“The day the soldiers stop bringing you their problems is the day you stopped leading them. They have either lost confidence that you can help them or concluded that you do not care. Either case is a failure of leadership.”
Colin Powell

“Have you ever stopped to ponder the amount of blood spilled, the volume of tears shed, the degree of pain and anguish endured, the number of noble men and women lost in battle so that we as individuals might have a say in governing our country? Honor the lives sacrificed for your freedoms.”
Richelle E. Goodrich

“When the rich wage war it’s the poor who die.”
Jean-Paul Sartre

“A command structure that was top-heavy with guys who looked good in uniform and talked right and did well enough not to embarrass themselves, while the really good ones quietly did all the serious work and bailed out their superiors and got blamed for errors they had advised against until they eventually got out. That was the military.”
Orson Scott Card

“Civilians are like beans; you buy ’em as needed for any job which merely requires skill and savvy. But you can’t buy fighting spirit.”
Robert A. Heinlein

“Sometimes you have to pick the gun up to put the Gun down.”
Malcolm X

“My centre is giving way, my right is in retreat, situation excellent. I attack.”
Ferdinand Foch

“War is too important to be left to the generals.”
Georges Clémenceau

I hope you enjoyed this selection of great military quotes.