You are at:Home »Quotes »100 Coffee Quotes about Your Favorite Drink

No matter what your favorite type of coffee is, ranging from espresso, cappuccino, caffé latte, caffé macchiato or Americano, there’s no denying that most of us couldn’t live without the black gold. Without these energizing drinks, life simply wouldn’t be the same. In fact, for those of us who consider coffee a way of life, drinking coffee has become a fierce and fiery love. Interestingly enough, the dark drink has been energizing and fueling generations for centuries. Just imagine where we would be if it wasn’t for coffee. Even though coffee’s reputation has been going up and down over the last decades, there’s no denying that it contains a variety of beneficial antioxidants and nutrients. There are many other health benefits associated with drinking coffee. For instance, it is a fat burning substance that boosts your metabolic rate, which in turn helps you to burn fat. Drinking coffee can also reduce your risk of getting diabetes. To celebrate the refreshing and energizing benefits of drinking coffee, we’ve created the following selection of coffee quotes.

The magical black elixir rejuvenates your mind and helps you to start your day in an energetic way. Especially when you wake up feeling groggy, coffee helps you to quickly bring about positive change.

“Coffee is the common man’s gold, and like gold, it brings to every person the feeling of luxury and nobility.”
Sheik-Abd-al-Kadir

For these and many other reasons, coffee has become an integral element of many people’s morning ritual. In fact, many of us wouldn’t want to start the day without a freshly brewed cup. If you are one of those who couldn’t live without coffee, you’ll love the following coffee quotes. 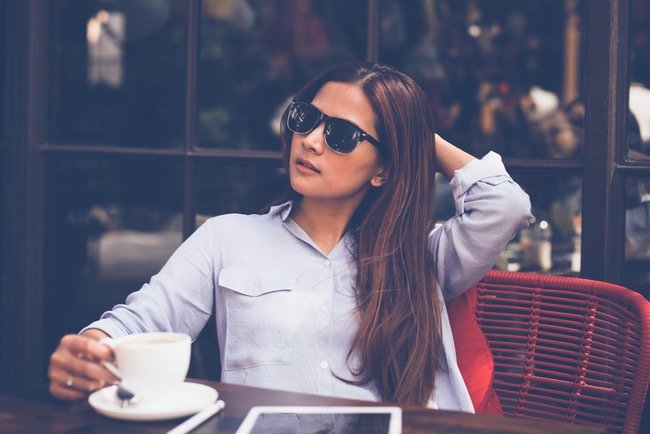 Have a look at the following coffee quotes which celebrate the energizing drink.

For many people, drinking coffee has become a way of living. You may not only drink a coffee in the morning but also when you’re meeting your friends during the day. As such, coffee is not only a fantastic way to jumpstart your day but also provides a short and refreshing break from work.

100 Coffee Quotes about Your Favorite Drink

One major reason why coffee is so popular is that it quickly provides you a burst of energy whenever you need it the most. No matter if you’re groggy in the morning or lack clarity during the mental low periods of the day, coffee quickly refreshes and energizes. The following coffee quotes celebrate the great benefits that come with drinking the black elixir so many have come to love.

“Like a symphony, coffee’s power rests in the hands of a few individuals who orchestrate its appeal. So much can go wrong during the journey from soil to cup that when everything goes right, it is nothing short of brilliant! After all, coffee doesn’t lie. It can’t. Every sip is proof of the artistry – technical as well as human – that went into its creation.”
Howard Schultz

“As long as there was coffee in the world, how bad could things be?”
Cassandra Clare

“A morning coffee is my favorite way of starting the day, settling the nerves so that they don’t later fray.”
Marcia Carrington

“The powers of a man’s mind are directly proportioned to the quantity of coffee he drinks.”
James Mackintosh

“Actually, this seems to be the basic need of the human heart in nearly every great crisis — a good hot cup of coffee.”
Alexander King

“Black as the devil, hot as hell, pure as an angel, sweet as love.”
Charles Maurice de Talleyrand-Périgord

“Coffee can energize the industrious at dawn, calm the reflective at noon, or raise the spirits of the beleaguered in the middle of the night.”
Amor Towles

“It doesn’t matter where you’re from – or how you feel… There’s always peace in a strong cup of coffee.”
Gabriel Bá

“Coffee is a lot more than just a drink; it’s something happening. Not as in hip, but like an event, a place to be, but not like a location, but like somewhere within yourself. It gives you time, but not actual hours or minutes, but a chance to be, like be yourself, and have a second cup”
Gertrude Stein

“The relationship between a perfect cup of coffee and a writer is just like the couple who always stand by and feel proud of being committed to each other.”
Himmilicious

“The morning cup of coffee has an exhilaration about it which the cheering influence of the afternoon or evening cup of tea cannot be expected to reproduce.”
Oliver Wendell Holmes Sr.

“It is inhumane, in my opinion, to force people who have a genuine medical need for coffee to wait in line behind people who apparently view it as some kind of recreational activity.”
Dave Barry

“No matter what historians claimed, BC really stood for “Before Coffee.”
Cherise Sinclair

“Even bad coffee is better than no coffee at all.”
David Lynch

“I don’t know where my ideas come from. I will admit, however, that one key ingredient is caffeine. I get a couple cups of coffee into me and weird things just start to happen.”
Gary Larson

“I decide to turn to my old faithful solution to all that is wrong in life. Coffee.”
Lisa Renee Jones

“There were some problems only coffee and ice cream could fix.”
Amal El-Mohtar

“Coffee, unless it is very good and made by somebody else, is pretty intolerable at any time.”
Iris Murdoch

“I snatched up the cardboard cup, plastered my lips to the plastic sippy-lid and sucked down a scalding hot mouthful. It burned, but I didn’t give a damn. I held the cup to my chest as if it were my most special friend while feeling the instant affect the coffee had on my mood and I smiled. “Hello lover.”
Ethan Day

“Let me wake up next to you, have coffee in the morning and wander through the city with your hand in mine, and I’ll be happy for the rest of my little life.”
Charlotte Eriksson

“This coffee falls into your stomach, and straightway there is a general commotion. Ideas begin to move like the battalions of the Grand Army on the battlefield, and the battle takes place. Things remembered arrive at full gallop, ensign to the wind. The light cavalry of comparisons deliver a magnificent deploying charge, the artillery of logic hurry up with their train and ammunition, the shafts of wit start up like sharpshooters. Similes arise, the paper is covered with ink; for the struggle commences and is concluded with torrents of black water, just as a battle with powder.”
Honoré de Balzac

“Adventure in life is good; consistency in coffee even better.”
Justina Chen

“Don’t stir all the warmth out of your coffee; drink it.”
Kate Chopin

“There’s no feeling in this world like writing in the attic on a snowy day and the smell of coffee brewing”
Charmaine J.Forde

“Love is blind. Especially in the morning, because I can’t see a thing before having coffee.”
Aleksandra Ninkovic

“Sure some medical experts say coffee could be a health hazard, but they obviously never built a website before!”
Geoff Blake

“I decipher the brewing machine because I am, after all, trained to save lives, and this is a life-or-death situation. We need coffee. Now. Or heads will roll.”
Lisa Wingate

“Without my morning coffee I’m just like a dried up piece of roast goat.”
Johann Sebastian Bach

“I believe humans get a lot done, not because we’re smart, but because we have thumbs so we can make coffee.”
Flash Rosenberg

“Coffee is a language in itself.”
Jackie Chan

“Jack and Stephen were neither of them human until the first pot of coffee was down, hot and strong.”
Patrick O’Brian

“Fueled by my inspiration, I ran across the room to steal the cup of coffee the bookshelf had taken prisoner. Lapping the black watery brew like a hyena, I tossed the empty cup aside. I then returned to the chair to continue my divine act of creation. Hot blood swished in my head as my mighty pen stole across the page.”
Roman Payne

“Rested, shaved, coffee’d, steaked, you will be a different man.”
Patrick O’Brian

“Anyone who started a quarrel had to atone for it by buying a dish of coffee for everyone present.”
Tom Standage

“After a geological epoch passed in which single-celled organisms evolved into talk show hosts, Mr. Coffee was still holding out on me.”
Darynda Jones

“Coffee and chocolate – the inventor of mocha should be sainted.”
Cherise Sinclair

“There’s no mistaking what kind of potion I need. Caffeine – for alertness and rejuvenation.”
Amy Alward

“When you cannot feel,
The purity of love,
The tenderness of beauty,
The drinkability of wine,
The simplicity of a smile,
You have to go back and drink coffee”
M.F. Moonzajer

I hope you enjoyed this collection of coffee quotes. How many coffees do you drink each day and how would your life look like without coffee?