Bullying is perhaps the single most destructive experience we’ve all come in contact with. Most are confronted with bullying during childhood and youth. However, bullying isn’t limited to a person’s early years. Instead, it can also confront you in the form of workplace bullying much later in life. No matter where a person comes in touch with bullying, it is always soul crushing. Sadly enough, being a victim of bullying is never a pleasant experience. It can completely destroy your self-esteem and may suck the happiness out of you. Not knowing if and when the next attack against you will be launched can leave you feeling entirely helpless. Bullying can have a truly devastating effect on your life but it doesn’t have to be this way. Luckily, there’s a lot you can do about a bully. If you need some encouragement to stand up to a bully, reading inspiring bullying quotes can be quite helpful. The following quotes about bullying encourage you to finally draw a line and to tell those who are bullying you that enough is enough.

When most people are confronted with a bully, they quickly accept the role as a helpless victim. As such, they never even question why they specifically are targeted by the bully.

“One’s dignity may be assaulted, vandalized and cruelly mocked, but it can never be taken away unless it is surrendered.”
Michael J. Fox

In many cases, people are bullied because they are – in some way or the other – a perceived threat to the bully. They may be smarter, more independent, or more popular than the bully. 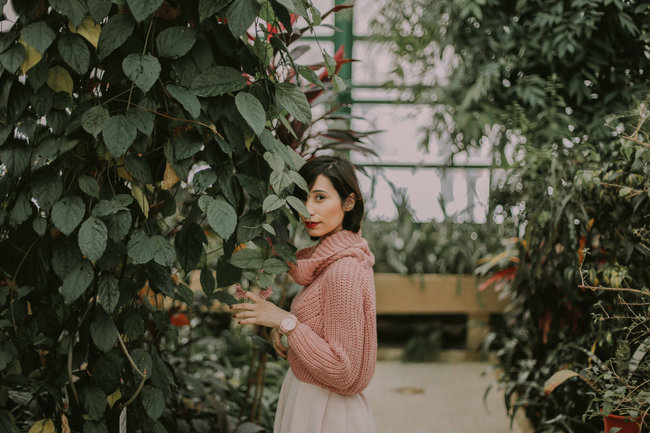 The following quotes about bullying will encourage you to take a stand for yourself.

Realizing this can change a lot because it makes you aware that the bully may be quite afraid of you and your potential. For this reason, you may not be a victim of bullying because you’re weak but simply to keep you in place and to prevent you from living to your true potential.

What is so incredibly empowering about anti-bullying quotes is that they encourage you to stand up for yourself. Most – if not all – of the following quotes about bullying stem from authors who themselves suffered from being bullied. As a result, these inspiring authors cannot only relate to your situation but they have also come up with a variety of interesting ways to deal with the issue. Let’s have a look at these encouraging anti-bullying quotes.

Here are these inspiring bullying quotes:

“Isn’t it kind of silly to think that tearing someone else down builds you up?”
Sean Covey 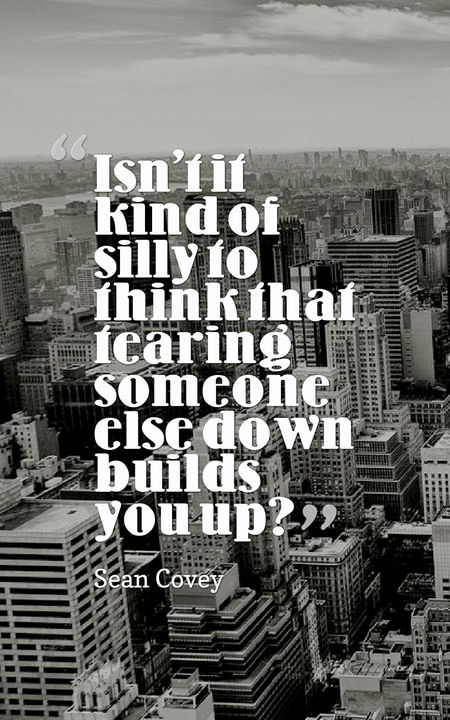 “People who love themselves, don’t hurt other people. The more we hate ourselves, the more we want others to suffer.”
Dan Pearce 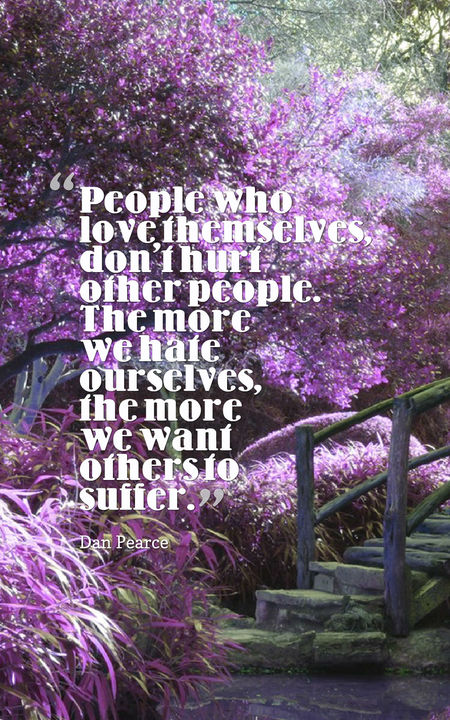 “If they don’t like you for being yourself, be yourself even more.”
Taylor Swift 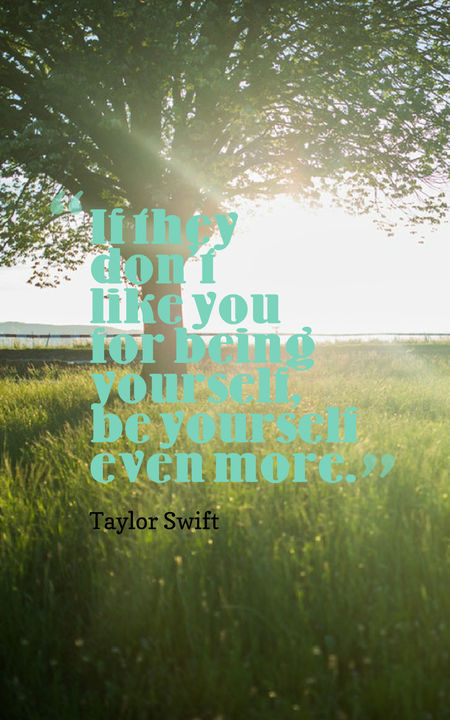 “People who repeatedly attack your confidence and self-esteem are quite aware of your potential, even if you are not.”
Wayne Gerard Trotman 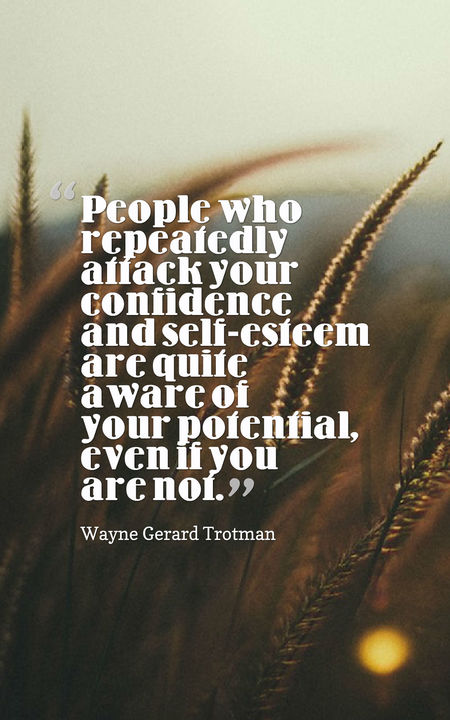 “Life is a fight, but not everyone’s a fighter. Otherwise, bullies would be an endangered species.”
Andrew Vachss 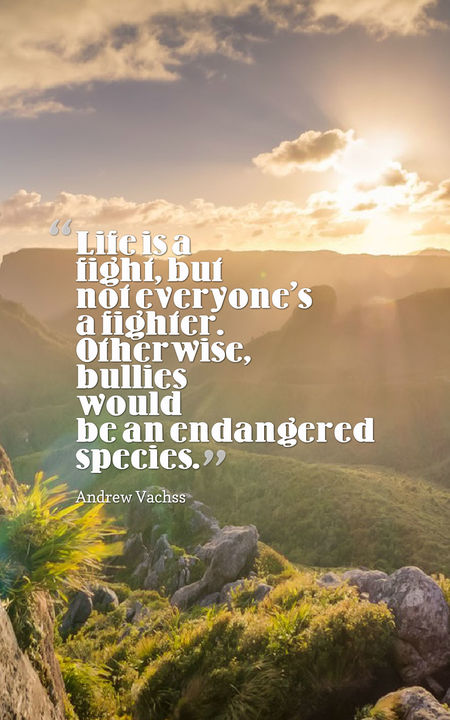 “When people hurt you over and over, think of them like sandpaper. They may scratch and hurt you a bit, but in the end, you end up polished and they end up useless.”
Chris Colfer 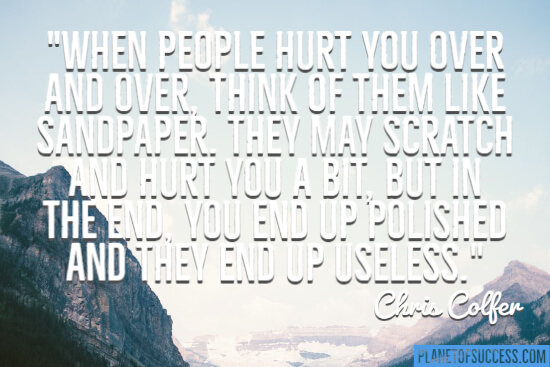 “Insecure people only eclipse your sun because they’re jealous of your daylight and tired of their dark, starless nights.”
Shannon L. Alder 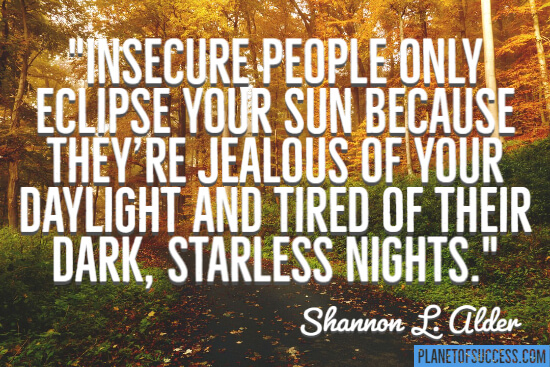 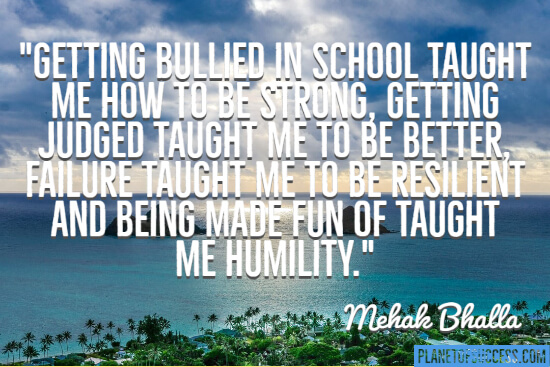 “Bullies don’t like to fight, son. They like to win. Being afraid is normal. The only fight you really have to win is the one against the fear.”
Kwame Alexander 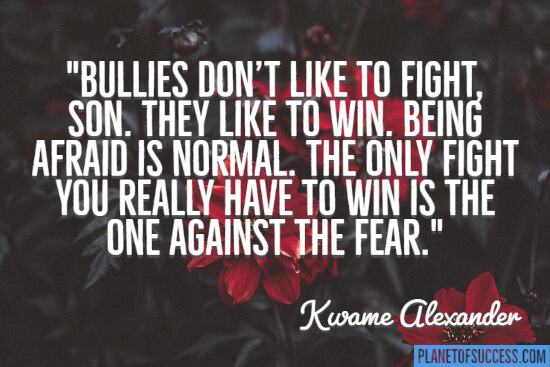 “She had been bullied and tormented by Leena for a long time and she wasn’t going to take it anymore. She was tired of being pushed around. She wanted to be strong for herself and be the type of person who her daughter would’ve wanted to have as a mother.”
Valenciya Lyons 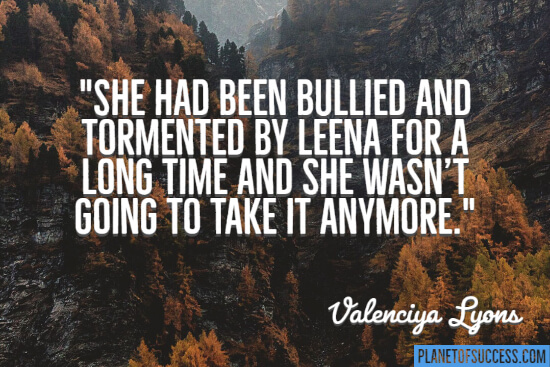 “[…] you don’t have to wait for someone to treat you bad repeatedly. All it takes is once, and if they get away with it that once, if they know they can treat you like that, then it sets the pattern for the future.”
Jane Green

“Remember this: They hate you because you represent something they feel they don’t have. It really isn’t about you. It is about the hatred they have for themselves. So smile today because there is something you are doing right that has a lot of people thinking about you.”
Shannon L. Alder

“Bullying is a horrible thing. It sticks with you forever. It poisons you. But only if you let it.”
Heather Brewer

“I would rather be a little nobody, then to be a evil somebody.”
Abraham Lincoln

“Be yourself. Don’t worry about what other people are thinking of you because they’re probably feeling the same kind of scared, horrible feelings that everyone does.”
Phil Lester

“Bullies like him were only strong while assured of victory; when faced with anyone more powerful, they turned into fawning sycophants, desperate to prove themselves.”
Jordan L. Hawk

“Most bullies are the product of a stressful and often abusive home life. Next time a bully threatens or attacks you, just yell, ‘Don’t abuse me like your parents abuse you!’ Then call children’s services and tell them you saw this bully crying in the bathroom and you’re worried about him. Bam! He just got moved to a foster home.”
Eugene Mirman

“Now, I’ve always known that there were bullies in the world. We’ve seen a lot of it in politics lately as well as in daily life. You see it where people who may be stronger, or bigger, or better with verbiage than other folks… show off. To me, that’s what bullying is, showing off. It’s saying, I’m better than you, I can take you down. Not just physically, but emotionally.”
Whoopi Goldberg

“There’s a kind of radar that you get, after years of being talked about and made fun of by other people. You can almost smell it when it’s about to happen, can recognize instantly the sound of a hushed voice, lowered just enough to make whatever is said okay.”
Sarah Dessen

“A bully hides his fears with fake bravado. That is the opposite of self-assertiveness.”
Nathaniel Branden

“We explain when someone is cruel or acts like a bully, you do not stoop to their level. Our motto is when they go low, you go high.”
Michelle Obama

“What if the kid you bullied at school, grew up, and turned out to be the only surgeon who could save your life?”
Lynette Mather

“Things will get easier, people’s minds will change, and you should be alive to see it.”
Ellen DeGeneres

“What a desperate, pathetic fool I was. Time after time, my ‘friends’ had shown me their true colors. Yet, I still wanted to believe they were sorry for causing me pain.”
Jodee Blanco

“If you’re insulting people on the internet, you must be ugly on the inside.”
Phil Lester

“Often the right path is the one that may be hardest for you to follow. But the hard path is also the one that will make you grow as a human being.”
Karen Mueller Coombs

“But the coconut is also a symbol of resilience, Samar. Even in the conditions where there’s very little nourishment and even less nurturance, it flourishes, growing taller than most of the plants around it.”
Neesha Meminger

“Don’t turn your face away. Once you’ve seen, you can no longer act like you don’t know. Open your eyes to the truth. It’s all around you. Don’t deny what the eyes to your soul have revealed to you. Now that you know, you cannot feign ignorance. Now that you’re aware of the problem, you cannot pretend you don’t care. To be concerned is to be human. To act is to care.”
Vashti Quiroz-Vega

“Apologies often cannot undo pain; but they can acknowledge it. And part of the cruelty of bullying is that the bruises it leaves are on the inside—it’s a hidden form of violence, shrouded by shame.”
Mathew N. Schmalz

“The human race tends to remember the abuses to which it has been subjected rather than the endearments. What’s left of kisses? Wounds, however, leave scars.”
Bertolt Brecht

“I strongly believe that love is the answer and that it can mend even the deepest unseen wounds. Love can heal, love can console, love can strengthen, and yes, love can make change.”
Somaly Mam

“Freedom of Speech doesn’t justify online bullying. Words have power, be careful how you use them.”
Germany Kent

“Gossip is just a tool to distract people who have nothing better to do from feeling jealous of those few of us still remaining with noble hearts.”
Anna Godbersen

“Be kind to yourself. Remember that when you abuse yourself, you will experience the anger, regret, and apathy of the bully as well as the depression, anxiety, and insecurity of the victim. Whatever you do, be kind to yourself.”
Vironika Tugaleva

“If you are neutral in situations of injustice, you have chosen the side of the oppressor. If an elephant has its foot on the tail of a mouse, and you say that you are neutral, the mouse will not appreciate your neutrality.”
Desmond Tutu

“Of all individuals, the hated, the shunned, and the peculiar are arguably most themselves. They wear no masks whatsoever in order to be accepted and liked; they do seem most guarded, but only by their own hands: as compared to the populace, they are naked.”
Criss Jami

“I mulled over the implications and decided not to waste my time worrying about what everyone else thought, or to bother attempting to change their perceptions. My time at the Keep was just a stopover. Let them wonder.”
Maria V. Snyder

“People try to say suicide is the most cowardly act a man could ever commit. I don’t think that’s true at all. What’s cowardly is treating a man so badly that he wants to commit suicide.”
Tommy Tran

“How would your life be different if… You walked away from gossip and verbal defamation? Let today be the day… You speak only the good you know of other people and encourage others to do the same.”
Steve Maraboli

“In order to escape accountability for his crimes, the perpetrator does everything in his power to promote forgetting. If secrecy fails, the perpetrator attacks the credibility of his victim. If he cannot silence her absolutely, he tries to make sure no one listens.”
Judith Lewis Herman

“Don’t waste your time with explanations: people only hear what they want to hear.”
Paulo Coelho

“If bullies actually believe that somebody loves them and believes in them, they will love themselves, they will become better people, and many will even become saviors to the bullied.”
Dan Pearce

“If you’re horrible to me, I’m going to write a song about it, and you won’t like it. That’s how I operate.”
Taylor Swift

“Perhaps it is only human nature to inflict suffering on anything that will endure suffering, whether by reason of its genuine humility, or indifference, or sheer helplessness.”
Honoré de Balzac

“I have thick skin, I think the fact that I was severely bullied in my childhood helped me build strength and believe in my artistic vision. I deal with rejection very well. I have a lifelong vision and an unbreakable spirit.”
Nuno Roque

I hope you enjoyed this collection of bullying quotes.