What would love be like without a good dose of humor? Could there even be such a thing as love without a sense of humor? It’s quite difficult to imagine living in a relationship that lacks humor. After all, laughter strengthens the relationship and makes you feel a lot closer to your significant other. Even more so, humor is what binds people together. For this reason, we’ve created a collection of funny love quotes that will put a smile on the face of your significant other. (See also: Beautiful Relationship Quotes and Wonderful Love Quotes).

There are many moments in life when it can be really helpful to have a couple of funny love quotes at hand that celebrate the amusing and humorous aspects of being in a relationship. By reading some of these fantastic quotes, you will quickly be reminded of the great importance of humor in a relationship.

“I love being married. It’s so great to find one special person you want to annoy for the rest of your life.”
Rita Rudner

Perhaps, you may wish to surprise your loved one with some funny love quotes that will brighten their day. Or, you may be looking for something that helps you to remember all the wonderful and funny moments you’ve experienced together. 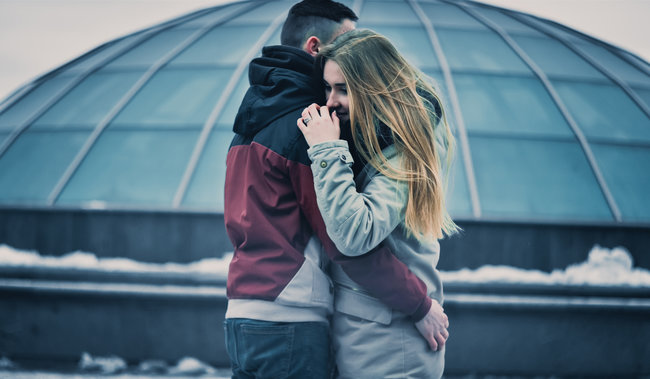 The following quotes will remind you that humor is an important aspect of each relationship. Even more so, the following funny love quotes will help you to remember that a relationship cannot exist for too long if there is no humor, amusement, and fun in it.

Here are some really funny couple quotes. Many of these funny relationship quotes will help you to remember the most beautiful and funniest moments you’ve spent with your loved one.

1. Jules Renard on hourglasses and love

„Love is like an hourglass, with the heart filling up as the brain empties.“
Jules Renard

„Marriage is like a game of chess. Except the board is flowing water, the pieces are made of smoke and no move you make will have any effect on the outcome.“
Jerry Seinfeld

„Anyone who says he can see through women is missing a lot.“
Groucho Marx

„What’s the best way to have your husband remember your anniversary? Get married on his birthday.“
Cindy Garner

Celebrating the day you married your partner is a wonderful opportunity to remember all those beautiful moments the two of you enjoy together. But some people always seem to forget to celebrate this special day. A funny way to avoid this problem is, of course, to marry on your man’s birthday. That way and of you will forget your anniversary day.

If you’re looking for some inspiring quotes to celebrate your anniversary day, have a look at our collection of anniversary quotes.

„Whoever named it necking was a poor judge of anatomy.“
Groucho Marx

„A man who correctly guesses a woman`s age may be smart, but he’s not very bright.“
Lucille Ball

7. Jack Benny on being happily married

„My wife, Mary, and I have been married for forty-seven years, and not once have we had an argument serious enough to consider divorce; murder, yes, but divorce, never.“
Jack Benny

8. Will Ferrell on the ultimate marriage test

„Before you marry a person you should first make them use a computer with slow internet to see who they really are.“
Will Ferrell

9. Nick Hornby on the future of a relationship

„It’s no good pretending that any relationship has a future if your record collections disagree violently or if your favorite films wouldn’t even speak to each other if they met at a party.“
Nick Hornby

„My friends tell me I have an intimacy problem. But they don’t really know me.“
Garry Shandling

11. Henny Youngman on the secret of a happy marriage

„Some people ask the secret of our long marriage. We take time to go to a restaurant two times a week. A little candlelight, dinner, soft music and dancing. She goes Tuesdays, I go Fridays.“
Henny Youngman

12. Woody Allen on being in love

„I was nauseous and tingly all over. I was either in love or I had smallpox.“
Woody Allen

„There are only three things women need in life: food, water, and compliments.“
Chris Rock

15. Rodney Dangerfield on being happy

„My wife and I were happy for 20 years – then we met.“
Rodney Dangerfield

16. Nora Ephron on marriage and divorce

„Never marry a man you wouldn’t want to be divorced from.“
Nora Ephron

17. Chelsea Handler on being serious about a relationship

„Obviously, if I was serious about having a relationship with someone long-term, the last people I would introduce him to would be my family.“
Chelsea Handler

„True love is singing karaoke ‘Under Pressure’ and letting the other person sing the Freddie Mercury part.“
Mindy Kaling

19. Lily Tomlin on love being the answer

„If love is the answer, could you rephrase the questions?“
Lily Tomlin

„Marriage is a wonderful institution, but who wants to live in an institution?“
Groucho Marx

21. Bob Ettinger on the difficulties of relationships

„If you text ‘I love you’ to a person and the person writes back an emoji — no matter what that emoji is, they don’t love you back.“
Chelsea Peretti

„If we take matrimony at its lowest, we regard it as a sort of friendship recognized by the police.“
Robert Louis Stevenson

„Honesty is the key to a relationship. If you can fake that, you’re in.“
Richard Jeni

25. Bill Cosby on what women want

26. Richard Lewis on being in love

„When you’re in love, it’s the most glorious two-and-a-half days of your life.“
Richard Lewis

„An archaeologist is the best husband any woman can have; the older she gets the more interested he is in her.“
Agatha Christie

28. Phyllis Diller on being of similar age

„Marry a man your own age; as your beauty fades, so will his eyesight.“
Phyllis Diller

29. George Burns on knowing that there is love

„Love is a lot like a backache, it doesn’t show up on X-rays, but you know it’s there.“
George Burns

„Marriage is a lot like the army, everyone complains, but you’d be surprise at the large number that re-enlist.“
James Garner

31. Jerry Seinfeld on knowing how to be a good husband

„Being a good husband is like being a stand-up comic. You need 10 years before you can call yourself a beginner.“
Jerry Seinfeld

„Love doesn’t drop on you unexpectedly; you have to give off signals, sort of like an amateur radio operator.“
Helen Gurley Brown

„A pair of powerful spectacles has sometimes sufficed to cure a person in love.
Friedrich Nietzsche

34. Maria Bamford on getting married

35. Norm Crosby on teenagers and love

„It’s probably not love if you don’t press your face to the toilet seat after they’ve used it to feel their warmth.“
Rob Delaney

37. Socrates on getting married

38. Charles Schulz on love and chocolate

„All you need is love. But a little chocolate now and then doesn’t hurt.“
Charles Schulz

39. Criss Jami on the fairness of life

„I will never deny that life isn’t fair. It seems as though when a woman leaves a man she is strong and independent, but when a man leaves a woman he is a pig and a jerk.“
Criss Jami

40. Russell Brand on being promiscuous

„I thought I was promiscuous, but it turns out I was just thorough.“
Russell Brand

„Women are meant to be loved, not to be understood.“
Oscar Wilde

42. Erma Bombeck on marriage and guarantees

„Marriage has no guarantees. If that’s what you’re looking for, go live with a car battery.“
Erma Bombeck

„The Venn diagram of boys who don’t like smart girls and boys you don’t wanna date is a circle.”
John Green

44. Hussein Nishah on the price tag of love

„You can’t put a price tag on love. But if you could, I’d wait for it to go on sale.“
Hussein Nishah

45. Richard Pryor on the toughness of marriage

„Marriage is really tough because you have to deal with feelings and lawyers.“
Richard Pryor

46. Joan Crawford on the fire of love

„Love is a fire. But whether it is going to warm your hearth or burn down your house, you can never tell.“
Joan Crawford

„When we find someone whose weirdness is compatible with ours, we join up with them and fall into mutually satisfying weirdness – and call it love – true love.“
Robert Fulghum

„In love, somehow, a man’s heart is always either exceeding the speed limit, or getting parked in the wrong place.“
Helen Rowland

49. A Jewish proverb on love

„Love is a sweet dream and marriage is the alarm clock.“
Jewish Proverb

50. Carroll Bryant on love as a two-way street

„Love is a two-way street constantly under construction.”
Carroll Bryant

„Love is only a dirty trick played on us to achieve continuation of the species.“
W. Somerset Maugham

„Love thy neighbor — and if he happens to be tall, debonair and devastating, it will be that much easier.“
Mae West

„When a couple of young people strongly devoted to each other commence to eat onions, it is safe to pronounce them engaged.“
James Montgomery Bailey

„If loving someone is putting them in a straitjacket and kicking them down a flight of stairs, then yes, I have loved a few people.“
Jarod Kintz

56. Fran Lebowitz on staying in love

„If you can stay in love for more than two years, you’re on something.“
Fran Lebowitz

57. Nicholas Sparks on what love this

„Marriage is like twirling a baton, turning a handspring or eating with chopsticks; it looks easy until you try it.“
Helen Rowland

59. Judith Viorst on car accidents and other things

„Love is much nicer to be in than an automobile accident, a tight girdle, a higher tax bracket or a holding pattern over Philadelphia.“
Judith Viorst

60. Leopold Fetchner on being sentimental

„My wife is really sentimental. One Valentine’s Day I gave her a ring and to this day she has never forgotten those three little words that were engraved inside – Made in Taiwan!“
Leopold Fetchner

61. Franklin P. Jones on having a worthwhile ride

„If only one could tell true love from false love as one can tell mushrooms from toadstools.“
Katherine Mansfield

„First love is a kind of vaccination which saves man from catching the complaint the second time.“
Honore de Balzac

„Love is an exploding cigar we willingly smoke.“
Lynda Barry

65. Mike Birbiglia on money and love

„What I really need is a woman who loves me for my money but doesn’t understand math.“
Mike Birbiglia

I hope you enjoyed this collection of funny love quotes.