You are at:Home »Mind »12 Bad Habits Highly Successful People Have Given up

If there’s something that truly unites all people it’s that we all pick up bad habits. For some reason, we fall prey all too often to negative behavior patterns. One reason for this could be that we do not even realize that an unhealthy habit has come into our life. But once we do notice that a certain activity is not beneficial, it’s way too late. As a result, we pick up all kind of negative habits throughout the years. Many of these habits stand between us and a successful life. They stop us from pursuing our dreams and make us accept how things are. That’s not a good thing if you want to be successful in life. The following will show you the 12 most important habits highly successful people have given up in order to reach success.

Breaking a habit can be quite difficult at times, but it is possible. Some habits can be broken more easily than others. But with persistence and the unquenchable willingness to do everything necessary to accomplish success, you can get rid of one negative habit after another. In some situations a bad habit can be removed within 18 days. Others might take two or more months to be finally broken.

In the end, all that matters is your willingness to accomplish greatness in your life. When you’re fired by your vision of success, there’s no obstacle that can stop you. Not even the bad habits that restrain you.

What separates the highly successful from most ordinary people is their immense willpower. It helps them to tackle their tasks, even when they don’t feel like it. And it also enables them to rigorously identify and break unbeneficial habits. Additionally, the successful are more than willing to give up whatever prevents them from reaching out for their dreams.

In order to live to your fullest potential, discipline and the strict observation of your behavior is essential. After all, success does not happen by accident. It’s the result of the accumulation of all your efforts. 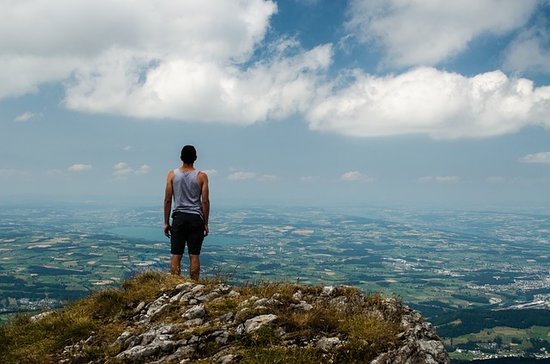 They all say it’s hard to get to the top. But they don’t mention the great view you have on the top.

Time and time again, successful people will tell you that if you want something bad enough, you’ll eventually accomplish it. But this burning desire within you will also enable you to have the necessary strength to give up unproductive habits, no matter how entertaining they are. Here are the 12 habits successful people had to give up in order to be successful.

12 Bad Habits to Give up to Reach Success

Habits the successful have given up to reach success:

Not everyone will reach the highest levels of success. You might be wondering what it is that makes all the difference:

Successful people don’t default to making excuses. They don’t allow excuses to discourage them from pursuing their goals. Instead, they accept the situation as it is and make things happen despite the circumstances they find themselves in.

I can’t change the direction of the wind, but I can adjust my sails to always reach my destination.
Jimmy Dean

Astonishingly, many successful people are far from being perfectionists. They may be striving for greatness, but they have also realized that perfectionism might not lead them there. In fact, excessive perfectionism can turn out to be a time wasting success killer that costs you more money than it brings in.

Perfectionism could be keeping you from effectively accomplishing your goals. After all, reaching absolute perfection is nearly impossible in most circumstances. It can be beneficial to strive for perfection, but at the same time it can also drastically keep you from making any progress. It goes without saying that trying to perfect something could prevent you from reaping the benefits of your work.

3. They don’t try to please others

Just think about the incredibly stupid things we do just to please others. Seeking other people’s approval is not limited to our private lives. It can also greatly affect what we do with our life.

The unquestionable key to failure lies in the attempt to please everybody. It simply isn’t possible, so why bother about it?

4. They don’t seek to remain in their comfort zone

Living within the confines of one’s comfort zone is very joyful. There’s nothing that frightens you and they are absolutely no risks you need to take. Everything feels familiar and you’re in total control. The downside of remaining in your comfort zone, however, is that it will prohibit your growth. There’s no development to be found within one’s comfort zone.

Successful people challenge themselves to stretch outside their comfort zone. They actively seek new experiences that help them to expand their horizons. Even if this means that they are confronted with the unknown or that they have to take risks. Whatever helps them to expand their consciousness motivates them to leave the pleasant comfort that living in the comfort zone promises.

5. They don’t feel entitled to anything

Far too many people grow up having a certain sense of entitlement. They believe that the world owes them all sorts of things. Consequently, this is how they approach life. It makes them less willing to work hard on the accomplishment of their goals. They are less productive and often lack the inner fire required to accomplish greatness. What is worse, these people’s high hopes are crushed by reality time and time again.

The highly successful understand that success isn’t an entitlement. Everyone is entitled to pursue success, but success itself isn’t something that happens by accident.

They understand that nobody on this planet owes them anything. As a result, they rid themselves of the impression that they deserve to succeed because they worked hard. They also do not accept bad luck as an excuse.

Thomas Corley, author of “Rich Habits: The Daily Success Habits of Wealthy Individuals,” did interesting research that supports this claim. He asked both rich people (annual income of $160,000+) and poor people (annual income of less than $35,000) about the time they spend watching TV. Interestingly enough, 67% of the group of rich people said that they watch TV one hour or less each day. Amongst the group of the poor, only 23% stated that they watch one hour or less. Even more interesting, only 6% of the rich group stated that they watch reality TV shows.

For the successful it doesn’t always take boundless discipline to stop watching TV. But it’s simply not a priority for these people. They have other things on their mind that engage them far more than watching a screen for hours.

One negative habit that can severely influence your life is to develop the impression that one no longer needs to learn anything. As soon as we are no longer willing to learn, we start settling for what we already know. We leave no longer room for development, growth and expansion. And while it’s pretty normal to leave school or university thinking that one has finished one’s education, learning is a continuous process.

Successful people haven’t stopped learning. Instead of trying to convince themselves that they know everything there is to know, successful people continuously seek to learn something new. Their striving for knowledge helps them to adapt to the changes that manifest in the world around them. It’s crucial for their progress.

8. They don’t let their egos stand in the way

With success there comes a dangerous overestimation of one’s strength and/or underestimation of one’s weaknesses. Everyone knows how dangerous it can be to assume that one is going to be good at everything only because one is successful at one thing. We’ve all made this mistake. And we’ve all have fallen down from the high pedestal. History has shown us time and time again that our egos can stand us in the way.

Successful people don’t allow their egos to get in the way of success. They have learned the hard way how important it is to correctly assess their strengths and weaknesses. As a result, they are less likely to fall prey to the cognitive bias that illusory superiority represents.

9. They don’t even try to multitask

Many people assume that multitasking helps them to be more productive. Quite the contrary is the case as various scientific studies have shown. Effective multitasking is a myth. It’s an oxymoron, because it simply is not possible. No one is able to multitask because the human brain is not capable of focusing on two things simultaneously. Instead of making you more effective, multitasking has been shown to increase your error rate. It will also make you waste important time, as the human brain struggles with switching back and forth from one task to another.

Successful people understand that it is not always the amount of work they get done that matters, but the quality of it. So instead of desperately trying to handle various tasks simultaneously, they commit their full attention to one specific task at a time.

10. They have given up worrying about failure

Failing is an essential part of life. No one likes it, but everyone does it. And quite frankly, failing cannot be avoided. If you take matters into your own hands, you almost always run danger of failing.

The problem with worrying about failure is that fear limits us. It stops us from pursuing our dreams and makes us settle for less.

Successful people have the courage to stop worrying about failure. They perceive failure not as something that punishes them, but as something that teaches them important lessons. With each failure they get a better understanding on what not to do on their quest for success.

Successful people know that there’s only one failure: not having the courage to try.

11. They have stopped lying to themselves

Far too often we are deluding ourselves. And in some severe situations it might be quite necessary to avoid a mental breakdown. But in most cases we are simply lying to ourselves because it’s more comfortable than facing the truth. We are scared of having to face harsh reality so we come up with all kinds of lies.

But when it comes to the pursuit of success, plain self-honesty is essential. Successful people know that lying to themselves may make life easier for them, but it won’t help them to achieve success.

12. They don’t blame others

It’s a human tendency to seek the fault for one’s own mistakes in others. Who hasn’t tried to blame someone else for a mistake they did? Even if one is just blaming the universe for one’s bad luck. The problem with this approach is that you will never truly get down to the root of the problem.

If you’re not capable of identifying the reason for a given mistake, you might repeat the same mistake over and over again. Consequently, blaming other people for your own faults will lead you absolutely nowhere.

But once you do have the courage to seek first within yourself for a potential explanation to what happened to you, you open yourself up to the discovery of potential solutions. Instead of continuously blaming others for your mistakes you will stop playing the blame game. It’s the essential step that will help you to actually start doing something about your situation, instead of just complaining about it.