You are at:Home »Happiness »The Power of Balance

The more I think about society, the more obvious it becomes to me that the majority of people are living a life that is not in balance. The imbalanced lifestyle aside, it is the (seemingly normal) polarization to the extreme that attracted my attention. It is apparent that the unaware masses simply love to turn towards polarization. Hence many become increasingly radical – in any way shape or form – over the time. Not only in a political sense, but also in various aspects of the way they live their life. They tend to polarize to the extremes on both sides of the spectrum, whenever and wherever they can. Without having a real choice they automatically chose the imbalanced life that is more often than not heavily out of touch with reality, but widely advertised through movies and other media that shape society.

This shift to the extreme can be seen in many different areas of life. You can observe it for instance in the imbalanced, excessive consumption of unhealthy, processed foods (that many consider a normal nutrition) to the exorbitant use of TV or the excessive consumption of alcohol and cigarettes. Not to mention that it becomes even more apparent when taking the development of political systems with their various manifestations from the left vs. right spectrum into account, e.g. Anarchism and Communism vs. Fascism and Nazism.

In the forest of polarization it is nearly impossible to see the forest for the trees, which is in our case the right balance. Really, it seems like balance got the short end of the stick in this society.

The Power of Balance

The more I reflect on my life and my experiences, the more important becomes to me the concept of living a balanced life. A life that is in harmony and tune with my body, mind and spirit. Living in balance strengthens me; it helps me to center my being and to stand in my own power – this is what I call the power of balance. Along with this comes the realization that the different spectrums of polarization – and the various extremes that can be found therein – simply do no longer attract me. Most of them never did; others have become fading phenomena that simply are no longer attractive and feel no longer right to be pursued in an imbalanced, polarized manner. 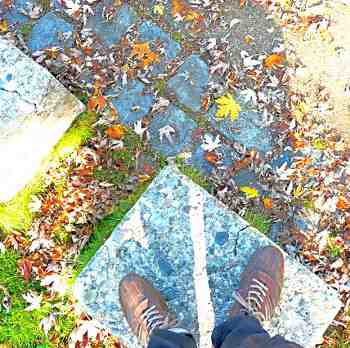 This also extends to the concept of positive and negative. The realization I came to was that it did not only feel unnatural to delve too deep into the negative, but also to get too heavily involved with the positive. I’m speaking here from my personal experience which might not necessarily be true for others, but to me, both sides – positive and negative – seem rather odd when dealt with in an extreme or too intensive manner. It feels more natural to balance both the positive and negative aspects of my being so that balance and harmony can be found in-between. This also means that I will have to face my shadow side just as much as I am facing the light side to integrate both into balance.

Take the lightworker/darkworker or New Age crowd for instance, which are spiritual movements that are especially characterized by their member’s attraction to either the positive or negative side, while both are on the path to a greater understanding. I know many people reading this will not like it, but when I look at this spectrum I see how both sides have lost touch with a healthy, balanced way of life and replaced it by excessively engulfing themselves in one of the two extremes available – the positive or negative. One might notice that on both of the extreme sides of this spectrum you have individuals that are rather self-righteously pointing their finger at the opposite, claiming that only they are on the right side doing the right thing. The only thing I see is that most members of those movements are heavily absorbed in their favorite polarity, without ever thinking of attaining balance and without even attempting to integrate both sides into balance.

Wherein lies the power of balance?

Living a life that is in balance with your body, mind and spirit means that you stand in your own power, like a rock in the surf. It means that events and happenings in the world around you do not bring you out of balance. Other people will not be able to manipulate you into giving up your sovereignty or influence your independence in any other way or form. Living in balance means that you’re no longer participating in the (emotional) rollercoaster of madness, with its excessive ups and downs that the mainstream-influenced life provides.

Instead of always being on the lookout for the next adrenaline kick or any other form of external stimulating distraction that diverts your focus as far away as possible from yourself and your self-growth, you’ll begin to get in touch with your being (something which many people tend to avoid at any cost). The power of balance also lies therein that media and society will no longer be able to influence and control you through emotional manipulation. If you are no longer affected by emotionally laden media or the drama some people come up with as a form of psychological manipulation, you slowly but surely begin to see it for what it is: attempts of capturing imbalanced minds.

This article about the power of balance is the second part of the series about balance. You can find a link to the other part here:
Part I: The Power of Balance
Part II: How to live a Balanced Life

In part 2 of this series we will discuss what you can do to live a more balanced life.

How important do you think is living a balanced life?