Not too many years ago I became convinced that taking cold showers is an incredibly healthy thing to do. Something that I absolutely needed to do. There was only one problem: you need a good dose of willpower, self-discipline and self-control if you plan on showering with cold water for a minute or so. Surprisingly, I managed to adapt quickly to the new stimulus, as I was able to develop the necessary willpower in a relatively short period of time. During this phase I learned a lot about the different ways to quickly improve my self-control. If you feel like you don’t have the necessary mental strength that is necessary to accomplish your goals and desires then have a look at the following. It will present you the most effective strategies that you can apply in order to quickly improve self-discipline.

But what is the underlying concept that words such as willpower, self-discipline and self-control stand for? These words all describe the very same thing: the mental strength that is required to do the things that need to be done, even if you don’t feel like it. Willpower is further described as the ability of a person to withstand short-term temptations so that long-term objectives can be met. It also defines a person’s ability to ignore a thought, feeling or temptation that does not contribute towards the accomplishment of a goal.

Scientists found that children with a high level of self-control grew into adults with greater financial security and greater physical/mental health. Another study highlighted that children who were able to delay gratification ended up having better social skills, lower likelihood of obesity and better responses to stress. Self-Discipline was also linked to academic performance, twice as much as the IQ of a student. Furthermore, scientific research found that people with high levels of self-control were in general happier than the rest of the participants. In fact, the higher the self-control of a participant, the more satisfied they were with their life.

Self-control is the number one trait that contributes to a person’s long-term success in all areas of life. It’s a necessary quality for any significant progress in life.

What most don’t know, however, is the interesting fact that willpower is like a muscle. If you train it, it will strengthen. If you neglect it, it will weaken. This means for you that you already have everything in place in order to improve the important skill of self-discipline. You only have to be willing to make this profound change.

Why does willpower deplete throughout the day?

Responsible for the depletion of willpower is a section in the right brain, called prefrontal cortex. This part of the brain is responsible for decision-making. It also regulates our behavior, which is why it has a great impact on our willpower and our ability to control ourselves. 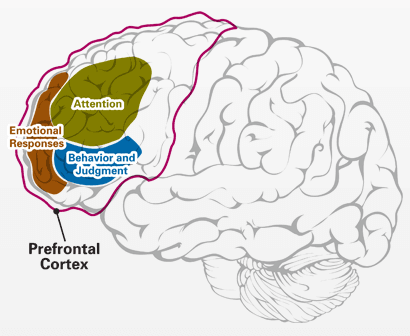 The prefrontal cortex area in your brain highlighted

The very first step to avoid a depletion of this area is to supply the brain with the necessary energy that is needed for its proper function. Secondly, it is important to get enough rest and sleep.

How to develop self-discipline?

In the following I will present you the most effective ways to improve your willpower, most points are even backed by scientific research.

1. Increase your capacity to tolerate stress

Kelly McGonigal, PhD and author of The Willpower Instinct, says that it is necessary to be able to deal with pressure if we aim to improve our willpower. High levels of pressure and stress use up our body’s energy, leading to instinct driven decision-making that is based on short-term gratification. Therefore, the very first step to develop self-discipline starts with building the proper foundation—our ability to manage stress.

The following point will address this area in detail.

Scientists of the Stanford University believe that there are two major things you can do in order to increase your brain’s willpower reserve: physical activity and meditation.

Meditation is linked to a wide range of benefits that all have a strong impact upon your willpower. It strengthens your ability to focus and concentrate, increases your attention and self-awareness, allows you to better control your impulses and helps you in managing stress. It was also shown in scientific research that meditation can affect beneficial changes in brain functions supporting self-discipline.

Plus, it doesn’t take years of dedicated meditation to affect these positive brain changes. In fact, the above-mentioned study found that brain changes could be observed after eight weeks of daily practice.

If you can only spend half an hour a day, then meditation is the most effective thing you can do in order to increase willpower in an extremely short period of time.

Postponing things for later is an effective strategy that allows you to break bad habits. Roy F. Baumeister and John Tierney explain this tactic in their book entitled Willpower: Rediscovering the Greatest Human Strength. Baumeister and Tierney came to the conclusion that it is far more powerful to tell yourself “Not now, but later” instead of “No, you can’t have that.” They also observed that the participants that applied the postponement strategy “ate significantly less than those in the self-denial condition.” The authors concluded:

The result suggests that telling yourself I can have this later operates in the mind a bit like having it now. It satisfies the craving to some degree—and can be even more effective at suppressing the appetite than actually eating the treat.
Baumeister and Tierney, Willpower: Rediscovering the Greatest Human Strength

Being constantly confronted with temptations depletes your willpower sooner or later. And as soon as that happens you will give in to the temptation.

Remember, a person’s willpower is not infinite. Whenever you are confronted with a challenging temptation it will cost you a certain amount of willpower to say “no” to it. 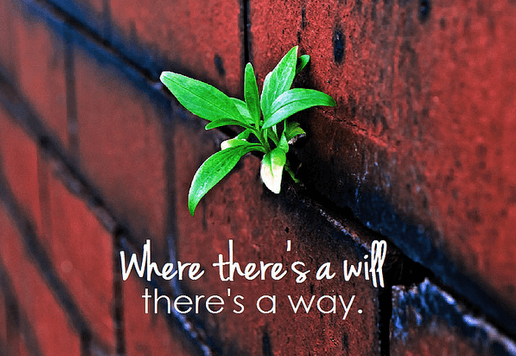 The best way to avoid this constant challenge is to remove all temptations and distractions from your life, abiding the old saying, “out of sight, out of mind.”

This sounds unspectacular, but it was proven in scientific studies to be extremely effective. In fact, so effective that it helped U. S. soldiers to break free from heroin addiction.

95 percent of the people who were addicted in Vietnam did not become re-addicted when they returned to the United States.
Vietnam Veterans Three Years after Vietnam

The study showed how intensively our environments affect our behavior. Luckily, even the smallest changes in your environment can help to break negative habits. These changes alter the stimuli that are driving your behavior, allowing your conscious mind to regain control.

If someone were to ask you to help them steal a car (or do anything of a similar nature) you’d probably have no problem to say “no.” Most wouldn’t even consider doing it. There’s no willpower or self-discipline necessary to do that. The reason why it is so easy for us to decline these kinds of invitations lies in the fact that we have already a script in our heads that only needs to be activated. In this case, it’s the “I would never ever do such a thing”-script.

We can make use of this ability in order to strengthen our self-discipline. Having so-called “If-then” plans helps you to script a standard response to situations that challenge your self-control.

6. Boost self-discipline by means of exercise and nutrition

The impact of exercise and nutrition is largely ignored when it comes to strengthening your willpower. By means of regular physical exercise you can increase your resistance to stress, allowing you to improve your self-control. It doesn’t matter if it is just mindful exercise, such as yoga or taking a walk, or even intense physical training. All these activities will provide you the benefit of helping you to become more resilient to pressure.

What are your tricks that help you to increase your willpower?