You are at:Home »Meaning of Life »10 Overlooked Life Lessons from The Lion King

The following is a guest contribution by Jeremy Ginsburg: Three years ago, my ideal Saturday night would have consisted of tons of cheap liquor, terrible music, talking about nothing with a bunch of strangers. Now, an attractive Saturday night includes a good movie and a good cuddler. Last weekend, I re-watched The Lion King with my girlfriend. It brought back so many childhood memories, but also sparked so many new insights. Some people may only see this as a symbol of Africa, some see it as a cute cartoon of wild animals’ lives, and others refer to it as a lesson about power. But I learned a lot from watching The Lion King as an adult. Here are the life lessons one can draw from The Lion King.

What Adults Can Learn from The Lion King

From a young age, Simba is taught that death is a part of life. His dad tells him straight up: “Death happens. It’s okay, it’s a part of life“. It is such a great lesson, too.  Unfortunately, when I was a kid, no one reminded me of this. In fact, I still find people struggle to bring up the topic of death. Most people don’t understand that the more you repress it, the scarier it will become. When I watched The Lion King again, I realized that the circle of life doesn’t apply to just animals, but to people as well.

2. Some people in this world are just evil.

Let’s be honest, Scar is just a plain out idiot. He is selfish, greedy, and unfaithful. My seventh grade English teacher told me that he wouldn’t allow his children to see The Lion King because he didn’t want to explain to his kids why someone would kill his own brother.  While I agree partially with that logic, I don’t think sheltering your kids so that they think that the world is filled with rainbows and sunshine without hatred or evil is correct either. There are many wonderful humans in the world that we live in. There are also a ton of dangerous people. It’s important that we remember this, so we don’t take things personally.

The older I get, the more I realize that a good companion isn’t just somebody you are attracted to or someone you like to go on dates with. It’s someone that you can get along with, someone that can be your best friend, just like Simba and Nala when they’re at their young age.

When I was young, every girl I hung out with and got along with had cooties. Well, now that I’m older, they still have cooties. But, once I learned to get over them, I realized that cooties are a good thing.

I used to think that any girl who shared my interests was too much of a “bro”. The older I got, the more I realized that girls that are “bros” make great companions. Those are the type of girls that you want to date, the ones that you share the same interests with and you can hang out with.

The song from The Lion King is just flat out amazing. Unlike other Disney musicals, this one only has a few songs. They all happen to be wonderful and memorable tunes. These songs are catchy, creative, and do a great job adding to the story plot. One of the songs does even more than that…

5. “Hakuna-matata” IS a Wonderful Phrase!

I’m not saying you should go out to the jungle and start eating bugs. But seriously, what are some better phrases that are out there to embody this? I don’t know any other phrase that talks about how to make the best out of your current situation. People often say: “Oh such is life!” “Ah, it’s whatever” or “Se Lavie” but Hakuna matata just makes everything seem not so problematic.

Maybe this phrase exists in a language that I don’t speak, but it’s something I myself need to remind myself more. It reminds me of a Mark Twain quote,

“I’ve had many worries in my life. Most of which have never happened.”
Mark Twain

If Simba can eat bugs and live a worry-free life, so can you.

6. Stick with your childhood dream.

When Simba is a child, he can’t wait to get that crown and rule his own kingdom. Then life happens. He runs away, he makes new friends and starts a new life. The older he gets, his dream as a child moves further and further back in his memory. Then when Nala comes, it becomes harder and harder to go and pick those memories back and retrieve them. I think this is very relatable to people as well.

Personally, when I was in senior year in college, I set up a one-on-one appointment with my career counselor and I told her that I had this dream of having my own travel TV show but I’d written it off. I told her I knew it was going to be hard and that I couldn’t make money right away, and that I would have to work my way up for 20 years or even more. My counselor was great. For the next 30 minutes, she sat there and convinced me that I shouldn’t have given up so easily and I should try.

Not everyone has access to a career counselor. Not everyone has people around them encouraging them and telling them that they should go and follow their dreams. Instead, we’re told from a young age to pursue something more realistic. We’re told that we need to get a good job and a steady income rather than going after what truly matters to us. What’s the point of having a dream if you’re never going to take action?

Simba forgets this for the majority of his life. But, fortunately, Nala and Rafiki (the crazy monkey) give him a little wake-up call.

Have you been hiding from your dreams? Do you need a wake-up call?

7. You must forgive yourself.

Simba lives his entire life feeling sorry for himself and blames himself for the death of his father. First of all, it wasn’t his fault. Second of all, it doesn’t solve any problem or make anything better by feeling sorry for yourself. Had he forgiven himself, he would have had more confidence and more clarity of what to do in life.

I think people often let a past mistake hold them back, too. Did you screw up a relationship or cause somebody to get hurt or fired from work? What’s in the past, is in the past. As Pumba would say, “you gotta put your past in your behind”.

Last time I checked there weren’t any hyenas living in urban areas. I don’t literally mean hyenas, I mean the negative people in your life. You know, such as the liars, debbie downers, and the ones that steal. Instead, stick with your own kinds. Think about the people who bring you up, challenge you and make you better. Those are the people you need to surround yourself with.

In this internet age, we are able to connect with any sort of person around the world. Be selective with who you hang around with. You are the average of the five people you spend most of your time with. Don’t let any of those five people bring you down.

9. Kids are way too entitled.

As I write this, I am 24. I probably have no business talking about kids, but here it goes:

I feel like every kid I meet that is under the age of five feels like they are Simba. They act as if they were born into this legacy and that one day they will get to become a king. They think they can get away with everything.

I was probably the same way. If I was hungry, I demanded food. If I wanted something, I got it. I know it’s not easy saying no to your child, but thinking that they are invincible and don’t have to follow any rules isn’t good either. Again, having kids of my own is one of my biggest fears, so I admit ignorance, so I’ll leave it at that.

10. Running away doesn’t solve your problems.

Suppress it, hide it, or lie to everyone else, but it’s not going to do anything positive for you. Simba spends most of his life living in fear. He’s scared. He didn’t forgive himself and he was scared to go back and challenge Scar. Once he did, he admits what he had done, challenges Scar face-to-face and ends up victorious.

Some people spend their entire life running away, trying to escape their problems and fears. When in reality, if you face the problem you have today, you’ll realize that it’s not as scary as you think, and then the rest of your life can be that much better.

I’m a victim of this myself. I spent five years of my life talking about things I wanted to do. My bucket list grew longer and longer, but I never took action. I was too busy partying, drinking, and coming up with more excuses not to do things I was passionate about.

In 2013, I booked a one-way ticket to Israel. I assumed that once I was there, I would be able to follow my dreams and make things happen.

I was wrong. The opposite occurred. Instead, I grew lonely, confused, and eventually depressed. I got fired from my job and was forced to come back home.

When I got back, I stopped hiding my fears and insecurities and started doing something about it. I stopped drinking alcohol and I started writing. I stopped isolating myself and started reading. I started eating healthy. I dealt with my issues face-to-face and took one step at a time.

In conclusion, I love Disney movies. And I feel so lucky that I was born in the time when all the Disney movies were at their peak. But there’s more to learn from them then we realize. 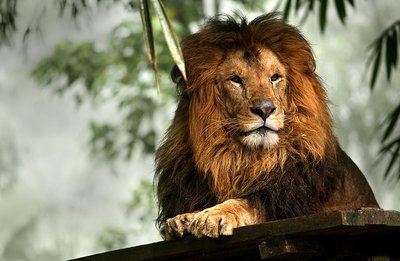 So next time you are wondering what to do on a Saturday night when it’s raining, just think to yourself, “Hakuna-matata!” What are your favorite life lessons from the Lion King? We’re excited to hear from you in the comment section below.

Jeremy is a writer and an “entreperformer”. He’s writing his first book, “F*ck Being Famous”. Sign up here for a FREE copy when it’s out. He also publishes weekly inspiring and funny videos on his YouTube Channel MrJgfor391.