You are at:Home »Conscious Living »Why Do People Lie?

Are you asking yourself the question why people lie? Considering the amount of lies that we all are confronted with on a day-to-day basis, the question why people are not honest is certainly appropriate. Especially when considering how painful it can be to find out that a beloved one wasn’t truthful to you. However, being the victim of dishonesty is only one side to the story. The other side that has to be considered is that most people themselves have trouble with being honest. While most of us are not outright liars that distort the truth in order to bring misery over others, many adjust the truth here and there. Sometimes we do it because we do not want to hurt others. In other cases we tweak the truth a little bit so that we can stand in a more positive light. And in very severe and pathological cases, people lie out of pure evilness or egotism in order to deceive other people. But we also lie to ourselves, for instance when we face a cognitive dissonance and try to reestablish harmony within our minds.

Sometimes it seems as if we are surrounded by people that are not truthful. Sadly enough, the available scientific research about lying confirms how commonplace untruthfulness has become. The statistics about lying even indicate that deceit and deception might be a part of any longer-lasting conversation. The research conducted by the psychologist Bella DePaulo, Ph.D. showed, for instance, that the study participants, who had to keep a daily diary about their untruthfulness, remembered on average that they had lied once or twice a day. Furthermore, the study found that the participants were not truthful in one fifth of their conversations that lasted longer than 10 minutes. Another finding highlighted that the participants deceived approximately 30% of the people they interacted with, during the course of a week. Yet, all these results do not even include the sort of lies that we use out of politeness or in exchange of pleasantries.

“Lying has long been a part of everyday life. We couldn’t get through the day without being deceptive.”

The scientific figures show to what kind of degree dishonesty prevails in the lives of nearly every one of us. This raises the obvious question: “Why do people lie so much?” And not only this, but also why we leave out parts of the truth or make use of white lies to influence what other people think of us. In the following are the main reasons why people tell lies.

Why do people lie?

The simple answer to this question is that people lie to protect themselves. People are dishonest in order to avoid embarrassment or negative judgment, but they are also not being honest in order to maintain the artificial image they have constructed around themselves. Others try to hide the fact that they have made a mistake or held an erroneous opinion. Yet, all these different kinds of deceptions are being carried out by the individual for protection. In fact, a lot of people who lie are doing it because of fear. Untruthfulness is also the result of trying to avoid the (negative) consequences of telling the truth. But, what motivates people to lie?

Dishonesty as a means of self-protection

There might be a single reason for a lot of dishonest responses: human beings have a need of protecting themselves from becoming too vulnerable. We do not like to be seen as a vulnerable person with weaknesses and insecurities. This is why people tell white lies in order to avoid the exposure of vulnerabilities.

“Too often, people are coached by an inner critic to not express directly what they want or feel toward other people. You may have a guard up that tells you not to be too vulnerable. You may downplay your emotions or act like you don’t care, because you don’t want to feel or look like a fool.“

– Lisa Firestone, Ph.D., Psychology Today, Why We Lie and How to Stop

Human beings strive for acceptance and approval from others. This can lead people to build up an artificial personality around their true identity. This kind of false identity can make people tell lies, whenever the framework is running danger of collapsing. This goes hand-in-hand with the importance that people place on their self-esteem. Even if they do not try to create a false image of their personality, people still want to look good to others and themselves. Logically, they will avoid doing anything that makes them look bad.

Lying as a reflex

Nearly every person tries in one way or another to influence the way other people perceive them. But sometimes this process can become quite difficult, when the individual has problems differentiating between the true self and the image they try to leave behind on others. Instead of acknowledging the real self, people take the fabricated self for their true self. As a result of this, people reflexively tell lies that help them to maintain this self-deception. Such a misrepresentation allows them to establish a consistency between how they see themselves and with the way they would like to be seen by others.

Lying by a leaving out the truth

Another sort of “protective lie” happens when a person hides important bits of information. This might happen in order to maintain harmony (“Why should I tell my partner that I bumped into my ex?”), or simply to avoid hurting other people’s feelings, which would have resulted in an emotional drama. Another reason for leaving out significant details lies in people’s attempt to manipulate other people’s impression of them or other people’s behavior towards them.

Lying as a means of being friendly

Up to this point we have concerned ourselves mainly with fabrications that others made use of, in order to protect themselves. But there are also those sweet little lies we tell each other in order to avoid frictions or to get along well with others. This is why we confirm to the social norm of politely answering “I’m fine, thanks,” even though we might not feel well at all at the moment. This type of lying also includes the white lies we tell others. For instance, when we tell a person that we like them or something they did, even though we clearly don’t. 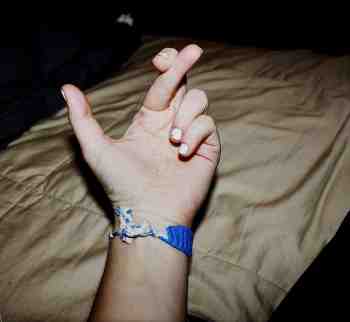 Why do so many people keep their fingers crossed and lie?

I hope that this helps you to understand why people lie. In the following we will concern ourselves with further important questions that revolve around the concept of untruthfulness.

Why do people pathologically lie?

So far, we have covered people who lie to protect themselves or change the truth a little bit out of politeness. But what about pathological liars, people who habitually lie? In many cases compulsive lying maybe the result of a person who has entirely manufactured their own reality. In this reality they are either a hero or a victim, depending on the situation. What is striking is that people who are habitually untruthful chronically try to present themselves favorably in every possible situation. As a result of this, many lies have to be created and many more deceptions have to be invented in order to maintain the whole deceit. This is also what differentiates pathological liars from people who use white lies or augment the truth a little bit. Pathological lies drift off into the world of fantasy and might be easily identifiable for others.

Why do men lie? And why do guys lie so much?

Naturally, the question arises, which of the sexes lies more often. Do men lie more than woman, or is it the other way around? Astonishingly, neither is the case. There exists a poll, conducted by 20th Century Fox, concluding that men lie more often than women. However, it remains questionable if the study was conducted following the scientific method. So while it seems that on average both sexes lie similarly much, the motives for their lies might differentiate.

How often do people lie?

The question about the average amount of lies that people tell is difficult to be answered. Many different studies that were published come to differing results. The reason for this lies in the fact that some studies differentiate between real lies and more harmless white lies out of politeness, while others don’t. Also, it’s quite difficult to conduct quantitative research that separates big lies from small lies, and entirely false statements from the adjustments to the truth. One research paper focused on the prevalence of lying in America. The result of this study was that the participants lied on average 1.65 times a day. This relatively low number might also suggest that the subjects might not have been aware of many of their smaller white lies.

Have a look at the following articles:

What are your strategies to notice when people are lying to you?