You are at:Home »Conscious Living »Are we doomed, yet?

It is the uncomfortable question, the question that seems to have sneaked into our minds without anybody noticing it. It happened in the darkest hour of the night, but slowly and painfully the question has emerged on the surface mind. And then it was there. In broad daylight. Awkwardly embarrassing and a little bit frightening. But it was there, with no intention to disappear ever again. Instead of fading away after some time, quite the opposite happened. Over the course of time the question even grew in relevance. No matter where you went, no matter what you read or what you watched on TV, everything seemed to add to the relevance of the question. And when looking at the current situation, the question “when is it all going to fall down?” does not seem as ludicrous as it seemed a couple of years ago. It does no longer seem ludicrous at all. In fact, to ask the question seems appropriate. It feels as if the question is being rightfully asked. What is worse, the question is so pending that many do no longer focus on the “if” but on the “when” aspect of the question. 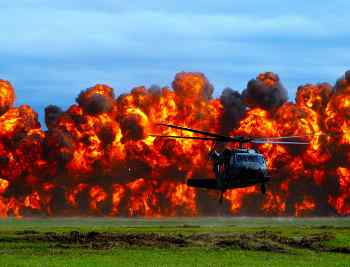 It’s not everything doom and gloom. Except in this photo.

The emergence of the question could be based on observations of recent developments in politics and other areas or be simply based on religious beliefs. Yet, it seems that an ever increasing number of people is pondering, in one way or another, about the time when the who knows what is going to hit the fan. No matter if the individual thinks about the possibility of an apocalypse, rapture or the collapse of a political system. And quite frankly, one cannot blame them for thinking about it. You should not blame yourself for it. Asking the question is justified. One might be instantly inclined to ask the question (concerning the fate of the world), if one so happens to be looking at the troublesome developments in various kinds of areas all over the world. As if that wasn’t enough, we are constantly confronted with new “evidence” supporting the theory of an impending collapse. We have deadly viruses spreading around continents, an elite that is motivated by greed, governments that rule over the people by deceit, corporations that place profit above anything else, at the cost of their employees, suppliers, customers and the environment, ruthless bosses that implement the strategies of these corporations and a population imprisoned by invisible walls of materialism. Not to mention the growing amount of conflicts in which over the time most of the major players have been drawn in. So it looks pretty bad, doesn’t it?

To answer the question, yes it does look pretty bad. It looks like we are doomed. Sometimes it can feel as if all hope is gone. As if there is no chance for humanity. To make things worse, it even feels as if you cannot have faith in humanity any longer. When looking at the things that mankind does to each other, the faith one had in humanity seems to fade away quickly. But in my honest opinion, things look far worse as they really are.

Perception can create a world full of doom

The way we see the world depends a lot on perception. The mind creates that perception. It makes use of filters that constantly separate important bits of information from the stream of information that we are constantly being bombarded with. The problem with these filters is that they are biased and heavily influenced by our personality, culture and other influences. Remember the time when some object gained your attention and from that point onwards it seemed as if you saw it everywhere? That red car of a specific manufacturer that your friend spoke about, when it suddenly seemed to pop up wherever you went? Or the specific kind of shoes that all of a sudden everybody seemed to be wearing? The way we perceive things is the crucial point that can make us drift off into a shiny dreamworld where everybody is just fine, experiencing pure bliss. But it can also make us see the world as a glooming hell that is majorly populated by dark, evil souls. As you may have noticed these perceptions are extremes that both lack the right balance. The world is neither heaven nor hell. Not everything that is going on is acceptable, but there are also a lot of good things occurring in this world. Which leads us back to the filters that I mentioned. If the filters of a person are adjusted to a gloomily world view then these filters automatically pick and highlight doom-based information that corresponds to these negative patterns. Alas the negative world view is constantly confirmed by information that fits the pattern. If the happenings in the world would consist out of a perfect equilibrium of good and bad events then the filters would highlight and emphasize the negative things only, leading to a distorted world view. The negative is highlighted, the positive ignored or unnoticed.

Do we take more notice of negative things?

This brings us the next point. The things that we concern ourselves with have a major impact on our perception of the world. It so happens that a vast majority consumes news broadcasts aired on TV. Many start their day with breakfast in front of the TV and finish it with another news broadcast late at night. Therefore, one can argue that television and newspaper heavily influence the way we perceive the world. However, there is one problem with all of this. The average newscast consists of a mixture of reports about recent world events, politics, people and sports. The problem lies therein that there is a great tendency to report mostly events that are negative in some way or another. Certainly, there are many neutral stories about sports and recent political happenings. But a huge portion of the news reports about negative events. This is the problem of newscasts in general. There is the dependence on having to inform the public about the negative things that happened in the world. Through this dependency the negative, evil, nasty stuff from all over the world is highlighted constantly. If you so want, these newscasts act as filters that highlight the negative. Just like the imbalanced and biased brain filters. Through the consumption of news a vicious circle is created, by which a lot of focus is placed on really terrible events. And when the individual is confronted day in and day out, maybe even during the entire lifespan, with a one-sided coverage it does not only become reality. It leads to a certain distortion of the filters within the recipients mind. Once the filters are distorted the perception of reality is negatively influenced. A vicious circle, indeed. What makes things worse is that it is by far more difficult to report things that are positive in nature. If a disaster is stopped at the last minute it naturally creates a lot less noise than a terrible catastrophe.

Besides the perception aspect that I just mentioned, the question of doom and gloom is also dependent from our point of view. To a young pupil the failure of an exam can signify the end of the world. To others the loss of material belongings could make life no longer worth living. From the ego perspective we have to elevate our point of view to the highest possible level. From this level we see that enormous empires have been built over the time, ruled the world for a certain amount of time until they broke down and were assimilated by something else. Ruthless dictators rose to the greatest heights of power, ruled over their people with an iron fist, but in the end their power diminished and things went back to a more normal state of being. This kind of elevated perspective allows us to (figuratively) stand on a high mountain observing the various kinds of activities that are going on in the lowland, without allowing them to draw us in. From this new point of view, which is far beyond the ego perspective, we can even see a certain commonality between the events that are happening now and those that have happened in the past. It allows us to understand that everything that has a beginning also has an end; once it has come to an end it is submerged by something else. It is the course of time that systems collapse, cultures decline, empires fall or catastrophes occur. Granted, those were devastating times, which brought millions of people to their physical and psychical limits, but it was never the end. Mankind always found a way to deal with the problem.

Looking back at the history of mankind we can also see that there were always people who believed that the end was near; people who wholeheartedly believed in an impending apocalypse, other people were waiting for the return of their Messiah. Yet, nothing of this came to fruition. We survived Y2K, 2012 and many other doomsday predictions. The conclusion from this is rather simple: it wasn’t worth worrying. The sleepless nights were unnecessary, the fear was inappropriate. Basically, it was a loss of time and energy, which resulted in a decrease of our life’s quality. Coming to this conclusion gives us the unique opportunity of establishing peace of mind. If we cannot even predict the end of the world accurately, then why should we worry about it?

Sadly, there are things going on in this world that are purely evil. Even though these events might not bring about the end of the world, they still make us afraid. As if that wasn’t said enough, we cannot change what is happening. We cannot stop a catastrophe from happening. We cannot avoid that ruthless people attempt to reach for power with their bloody hands. But what we can influence is the way we think about the things that are going on. It is our decision if we allow these things to scare us. It is our decision if we spend a great portion of our time thinking and pondering about the things that could happen. The decision is ours. The question we have to ask ourselves is whether we want to allow negative developments to scare us. When answering this question we have to keep in mind that fear paralyzes us, it makes us panic and as a consequence we do not meet rational and reasonable decisions. Do you want to live in fear? As in alternative we could replace fear with hope, trust and faith.

As we reach the end of this article, there is one thing left that needs to be uncovered. It is the mystery surrounding the word Apocalypse. Nearly everybody associates catastrophe and doom with this word. What most don’t know is that the word Apocalypse is derived from the Greek word “apocálypsis” which literally means disclosure of knowledge. If something that was previously hidden is disclosed it can massively change the world. It can be the end of the world as we know it, but it can also signify a new beginning.

The following articles might also be of interest to you:

Do you prefer to keep a positive outlook on life?