You are at:Home »Comfort Zone »You can’t be everyone’s darling

I’m a passionate football (soccer!) fan and played many years in a football club as a defender. Naturally, I also had a favorite club, which was facing a rather difficult situation, some time ago. The intricate situation arose when the established goalkeeper (A) of the team announced (during the ongoing championship) to retire at the end of the season. Originally, the club officials had planned to replace the old keeper (A) with a very talented but also experienced and established goalkeeper (B) of another team, at the cost of approximately $20m. But, the plans of the manager and the directors were thwarted when the coach suddenly decided to put his trust in an up-and-coming goalkeeper (C) of the youth team, for the rest of the season. At the end of the season, it happened as it was bound to happen: the up-and-coming keeper (C) proved to be an excellent and very talented goalie, but the club officials were hesitant to announce which keeper (B or C) would become the goalkeeper for the next season.

The tricky situation arose out of the fact that most of the (very influential) hard-core supporters of the club were fascinated by the performances of the up-and-coming goalie (C), whereas the other fan grouping spoke out in favor of the more experienced keeper (B), even if he would cost a lot of money. The club officials knew that, when coming to a decision, they would automatically disappoint one huge fan grouping, and cause tensions and unrests within the club. Basically, the bosses had to come to a decision that simply could not please everyone and would elicit a lack of understanding in at least one influential fan grouping.

In the end, the chief executive and the directors met a final decision and (naturally) disappointed many fans, but they did what they found to be the best for the club as a whole.

You can’t be everyone’s darling

One important lesson I learned throughout my life is that I cannot be everyone’s darling, not even if I badly wanted to be. Luckily, I never really cared about trying to be all things to all men, but it was tough to accept the fact that with nearly every decision I met, there would be at least one person somewhere who would not like my decision at all or even a friend who would be automatically disappointed by my decision.

Starting a blog was such a decision and before I even started publishing articles here on my blog, I knew exactly that some of my visitors wouldn’t agree with me and the opinion I expressed on various topics. Not because my philosophy is so different from anyone else’s (which it is clearly not…), but simply because of the fact that I express my opinion, which will not coincide with everyone else’s opinion.

When you donate $100 to a charity, your friends will clap you on the shoulder and say “well done”, (at least when you brag about it), the employees of the charity will be thankful for the donation, which further helps them to improve the life’s of the beneficiary. But, there will be at least one person on this planet, screaming at you in rage and wanting to know the precise reason why you didn’t donate $1000 or why you didn’t donate to another charity that could need the money more urgent.

I hope you get what I’m trying to say. No matter how well-intended and benevolent your actions are, there will always be someone that is not pleased with what you are doing, no matter for what (unintelligible) reason. Some might misapprehend your intentions, others deprecate them, as they do not coincide with their beliefs, but some other very interesting reasons that lie behind this are enviousness, pure negativity, jealousy but also fear. In some cases even just a lack of time and/or boredom combined with pure malice, which results in the recent phenomena of (internet-) trolling. The thing with all of this is: it’s none of your business, or at least it shouldn’t concern you. Whether you like it or not, every person you come across in your life will put who you are in a particular category in their head. It’s often a very superficial categorization and it might change from time to time, but the point is that you get labeled accordingly to THEIR beliefs and THEIR previous experiences, which is all in all a process that you cannot influence by any means. There is no point in fighting it or trying to be all things to all people as they will categorize and label you one way or the other. 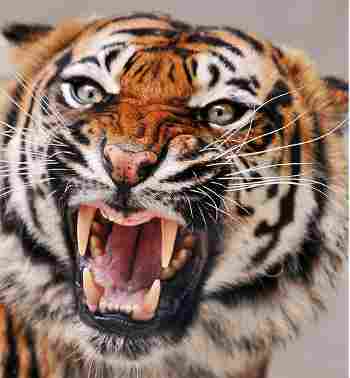 Why bother about being everybody’s darling when you are a tiger?

Recently, I’ve read an interesting in-depth analysis of a software based company. The report was completely irrelevant to this article, but one statement of it is worth mentioning here. It stated that whenever the company made changes in their T&C, changed a policy or introduced a new product, there were at least (!) 2 to 5 percent of its customers that were not pleased with the changes.

Whenever the software company introduced a more effective product that delighted the vast majority of their costumers, they also received many complaints by angry people, for various reasons. Some simply didn’t like the replacement of the old product or misapprehended the new opportunity as a risk, were too lazy to acquire the necessary knowledge to get used to the software or whatever. They were annoyed enough to speak up and write an angry letter, with the intention to let the company know their opinion.

I’m sure, other companies are facing similar complaint rates as well and I would bet that it is alike in our personal and professional life. So to say, no matter what you do, you’ll disappoint or annoy the 2-5% of your customers/friends and receive negative feedback from a given amount of them, even if you were to stand on your head to please every one of them.

So, unless you are a huge company that is keen on reducing the figure to a slight minimum of less than 1%, there are only three ways to deal with it: continuing in trying to be everybody’s darling, giving up and to stop doing what you did or to do continue giving your very best and to fascinate the masses with it.

Trying to be all things to all people seems a promising way to delight everyone out there. But, in reality, it’s the path to mediocrity that will bore people off. I personally find that being everyone’s darling is identical to being nothing, non-existent, or simply not worth mentioning of.

Photo by Tambako the Jaguar

How do you free yourself from the need to be everyone’s darling?