Not only Ben Parker, the fictional character from Spiderman from the pen of Stan Lee, quoted that great responsibility came with great power, but quotes of similar origins can be found all the way back in history – from the twentieth century up to the Ancient Greeks. It was Lord Acton, who wrote that “power tends to corrupt, and absolute power corrupts absolutely” and the philosopher Socrates “rule of worthy of might,” that expressed similar ideas. In general, I would say that the more successful you are in life, the greater becomes your power and influence, but also the more complex and multilayered your responsibility will become. Another saying says, that “with success comes responsibility” and no matter if people try to avoid, refuse to believe or simply ignore this liability – it still exists and will not burden from our shoulders.

You might have noticed that I’m speaking of a “complex and multilayered responsibility,” simply because I believe that this kind of responsibility changes from case to case. There is no definition that fits for everyone, as we are all unique and so are the ways to cope with this kind of responsibility. A gun owner – for instance – has great power over people that aren’t wearing a gun, so it is his responsibility not to abuse this kind of power. The driver of a fancy sports car must know that when doing a street race with another car, that he does not only put himself at risk but also every other road user and pedestrian.

As I’ve already said, it is not that easy to specify this kind of responsibility, as the multilayered liability includes for some to know what kind of (negative) consequences their actions could have – and to be accountable for these, whereas others also consider their (social) responsibility towards others and their society as a part of it as well. As you can see, there is no accurate definition that suits this complex and multilayered responsibility that comes with great success and power, but I’d like to point out some tips on how everyone can individually meet this responsibility, one way or the other, if you are already successful in life and possess this kind of “great power,” no matter if it is a weapon, a sports car, wealth or an executive position in a company.

The fatal effects of greediness are not only commonly known to us as some hundred managers, equipped with pure selfishness, a huge portion of cool-bloodedness and the never ending desire for ever more and more money, caused the global financial crisis. Greed and the avarice for money are the ulterior motives behind so many (terrible) actions that people did to each other and what makes it even worse is that greediness seems to blank out even the slightest concern about the possible consequences of this behavior and if others might suffer from it. I guess, that every one of us experienced one or the other form of greed at times in one’s life, may it be during one’s childhood, youth or in adult life.

What is important is to recognize that there is already enough for everyone on this planet. Money has only become a precious commodity because a view individuals started to literally hoard and stockpile money on a large score on their bank accounts – and I’m not speaking of “just” a view million $. So, be aware of your immense responsibility that revolves around the often so typical greediness or stubbornness of us humans. You will always have the choice to earn a little bit more money on the expenses of others. Important is that you are aware of these consequences that others might suffer from a greedy misbehavior and that you ask yourself how it would be, if you would have to suffer from it, too!

Exploitation & taking advantage of others

Have you ever seen the movie “Coming to America,” where Eddie Murphy plays Akeem – the heir to the throne of a fictitious African country? Even though it was a just fictitious comedy movie, many aspects of it were quite true – such as the fact that many leaders or kings of African countries have obtained massive riches – more or less by exploitation of the natural resources and their country in general. Just think about the former dictator in Tunisia – Ben Ali – and his clan and how ruthlessly they pillaged their fellow countryman. And that is only one example of a phenomenon that can be seen around the world – a small group of people that lived in their palaces full of riches they accumulated by taking advantage of others, while the rest of the country was predominantly living in poverty.

What I’m trying to say is, what’s the point in being a billionaire, accumulating tangibles and possessing 1.5 tons of pure gold (Ben Ali clan), when you know that everyone around you is living in poverty, because of your malicious behavior? Wouldn’t all these billions have provided everyone in that country enough food and a safe place to live for decades?

Be aware of the huge responsibility that lies on your shoulder once you have accumulated riches. It’s quite easy to lose the grasp of reality, once you are getting used to living in an isolated village with neighbors that are living in the same luxury as you do.

I know entrepreneurs that have founded successful and respectable companies, but instead of giving something back (to their employees, society, etc.) they focused their whole concentration on stabilizing their leader position in the company and its profit.

But I also do know of entrepreneurs and organizations that are “giving something back” as good as they can and as far as the limits permitted it to do. Some integrated people that have handicaps or were unemployed for a long time and couldn’t find another employee, even if that meant that the owner of the company would have to waive on some of his profit. I’m sure that the owners were warned by their assistance as “giving back” would have deteriorated the balances and so on (…) , but for these owners, it didn’t really matter if the integration of a handicapped person was rentable or not, as it was by far more valuable for them to help someone to make his life at least a little bit easier.

The most commonly known companies have public relations departments and one job of the employees of these departments is to “do something good and talk about it.” I find this great, as these are companies that are giving at least something back by helping others or charities, even though the reasons and ulterior motives are more likely related to the improvement and development of a positive company image. Nonetheless, these organizations and enterprises are still helping people and give something of their fortune and wealth back, so I won’t criticizes them for that.

When you try to do something good, do it without any ulterior motives and without the expectation to get something back. That’s the real way to of “doing good things.”

They don’t remember your wealth, but your actions

It is not the immense wealth, assets or tangibles that people will remember for a person that has departed. People are reminded of their actions, not the amount of money they earned and the luxury goods they accumulated during their lives. People won’t remember your wealth, but the way you invested this money, either for yourself and your family, or whether you invested it in making this world a better place to stay.

Yes, you can help!

Everyone can help somehow and in some way, at every place and during every time. Some might be too busy, so they donate a small amount of their salary; others donate their time and manpower and work voluntarily for a charitable organization. Even though you might just be able to donate $5 or only one hour for voluntary work, it is better than nothing and your effort will be highly appreciated – I’m sure of that! 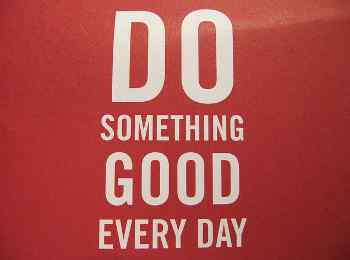 Do something good, one step at a time

You might say, “I don’t have any money I can donate,” or “I don’t have much time to spend,” but the ways you can give something back are so multifold and different for every individual. Some have chosen to share their knowledge, either by becoming a mentor for someone or in many other ways that reach out to hundreds of individuals, for instance by writing a book. Don´t lock your precious experiences only into your own brain! You can always help and motivate others with your experiences you have gathered. Allow others to achieve success as well as you did.

Do you agree that with great power comes great responsibility?