You are at:Home »Productivity »Stop Watching TV: Benefits of not being a TV Junkie

Television is an extraordinarily great invention and has become the #1 form of entertainment in many countries. It allows us to stay informed about recent events, breaking news and entertains us whenever we feel just the slightest strains of boredom. Besides all positive benefits that came with the television there are also a lot of negative aspects of it, especially when it comes to living a conscious life and personal development. When I was a teenager I was used to spending some hours watching TV daily. I wasn´t addicted to television and fulfilled all my obligations, however, it was a habit for me to turn on the TV in the evening when I wasn´t in school or hanging out with my friends. I simply didn´t know how to spend my time in a more valuable way when I was bored. When I grew older the amount of series that I really liked started to reduce and I became more and more involved with the working world, which reduced my spare time drastically.

The least thing I wanted to do was to spend my precious time zapping through TV channels. I started to watch television more consciously, which means that I only turned on the TV when I knew what I wanted to see and for how long. 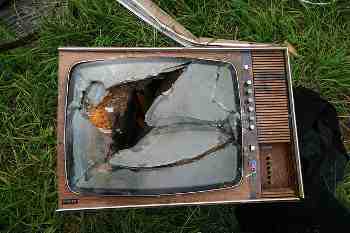 The benefits of not watching TV are vast

I´ve mentioned it already in my article about conscious living that I recently changed my TV consumption habits when I had a few days off, which made me realize some of the most negative disadvantages that television comes with. I did not have had any plans for the day at all at that time, which is why boredom started to occur and the desire for action and entertainment increased, which was the reason why I turned on the TV. Within a few days it started to become more and more complicated for me to pursue my tasks or to stay in touch with my friends. It was easier to turn on the TV and zap through all the different channels, permanently shifting from serials to movies and news. I was totally behaving like a robot and found myself sitting in front of the TV whenever I became bored. You can tell that I was really pleased to have left all the “zapping through TV” behind as soon as my vacation ended. From this point on I further reduced my TV consumption and I don´t feel like I missed out on anything, in fact: I´ve never looked back and started to live my life more conscious.

Here are some more benefits of not being a TV junkie and some reasons to stop watching TV (all the time):

When we watch TV our brain activities start to switch from beta waves (alert consciousness) to alpha waves, which results in lower consciousness. On television, we see shows, serials, and movies that appeal to conscious lowering emotions such as fear, anger, and desire rather than to consciousness raising emotions that would lead us to reflect and question things.

“Television provides an escape from reality not unlike that of drugs or alcohol. A person can slip away into the fantasy world offered by television programs and effectively impede the pressures and anxieties of their own lives. This is similar to ‘going on a trip’ induced by drugs or alcohol.” (Daniel Hardebeck)

The similarities between being addicted to drugs and watching TV are surprisingly huge and TV addicted people show very similar behaviors like a drug addict. Here is what I´m talking about:

3. TV and its negative side effects:

Habitual TV viewing for many hours a day can have very negative side effects from physical aspects (such as overweight) to social exclusion. Besides that, massive TV consumption will also be an obstacle when it comes to personal development as you simply haven´t enough time to focus on your personal growth.

Watching TV is wasting huge amounts of our precious time, but as soon as you decide to turn off the TV once and for all you will notice the extra time you can gain with this decision. It may seem awkward in the first weeks and you won´t not know what to do instead, which will let you experience a lot of boredom. But as soon as you discover activities that are more productive than watching TV (exercising, joining the gym, learning a foreign language, learning to cook, etc.) the boredom starts to disappear. Another benefit is that it doesn´t feels anymore as if time has flown by without making use of it in an efficient way.

5. No need to schedule your life

With the decision to turn off the TV there is no need anymore to schedule your life around the TV. Back in the time when I was watching TV regularly I scheduled some parts of my life around television serials and movies, which also influenced the time I went to bed. Instead of having a set time when I go to sleep I waited until the movie had ended until I decided to go to bed. It also happened that I decided to watch the serial that was following thereafter as well and it all reduced the amount of sleep.

Have you ever tried to stop watching TV? What are your experiences and how did it influence your happiness and your life in general?