Porsches are not only known for their performance, reliability, and excellent workmanship, but also for the sensation of power one experiences when sitting behind the wheel. Here is the wonderful success story of Ferdinand Porsche! Ferdinand Porsche was born in 1875 in the Czech Republic to German-speaking parents and started to develop a high interest and aptitude in mechanical work at a young age, which is why he chose to be a mechanical apprentice in his father’s shop. When Ferdinand Porsche turned 18 he was referred a job at Béla Egger, an electrical company located in Vienna, where he worked five years and developed the electric hub motor. After this, he became employed by Jakob Lohner & Co, which was a Vienna-based manufacturer of electric cars, where he started to start working with Jacob and Ludwig Lohner. One achievement that resulted out of this collaboration was the “System Lohner-Porsche”, which was a carriage-like car that was driven by battery-operated electric motors and was exhibited at the most prestigious car exhibition of the year 1900.

Even though Porsche’s invention was a celebrated achievement he continuously tried to reduce and eliminate the three most disturbing problems the “System Lohner-Porsche” was facing:

Porsche made the genius conclusion to replace the massive battery pack with a combustion engine, built by Daimler, which became a generator for the electric motors. Porsches idea led to the production of the first petroleum-electric hybrid vehicle that was ever built.

Ferdinand Porsche worked from 1906 till 1929 for different companies, such as Austro-Daimler and the Daimler Motoren Gesellschaft in Stuttgart. During this time he was honored with a doctorate degree from the University of Technology in Vienna and designed many cars, such as the Prince Henry Trial (Model 27/80). Porsche left the Daimler Motoren Gesellschaft, whose name started to change into Mercedes-Benz in 1929 to start working for Steyr Automobile, but became unemployed after the Great Depression that led to the collapse of Steyr Automobile. Porsches unemployment led to the foundation of the historic firm Dr. req. h.c. F. Porsche GmbH, that was a consulting firm for constructions and proceedings for motor and vehicle construction. The Porsche GmbH was founded by Adolf Rosenberger, Dr. Anton Piëch, and Ferdinand Porsche and started to recruit old co-workers of Porsche as well as Porsches son, Ferdinand Anton Ernst Porsche, commonly known as Ferry Porsche. 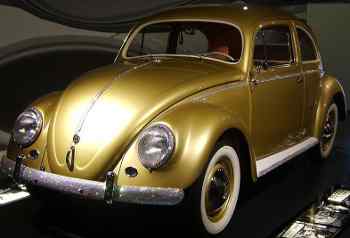 The one-millionth VW Beetle in gold

In 1933, Adolf Hitler the German dictator announced that it was his political agenda to motorize the whole nation, with the aim that every citizen would be able to own his very own car. After Hitler’s announcement Porsche was allocated the project to develop a “people’s car” that was capable of transporting two adults and three children for a reasonable price. The project led to the creation of the economy car Volkswagen Beetle that became the most-manufactured automobile in the world, with over 21 million produced cars.

Do you think the success story of Ferdinand Porsche is inspiring?