Ferrari is not only known for majestic sports cars, deafening formula 1™ race cars but also for the power, the acceleration, and the exhilaration that its drivers experience. Here is the wonderful success story of Enzo Ferrari! Enzo Ferrari, born in 1898, has always had racing in his blood combined with the strong desire to become a race driver. However, the First World War began when Enzo Ferrari was 16, which lead him to become a mule-skinner in the 3rd Alpine Artillery division of the Italian Army. In his early years, Ferrari suffered a lot of throwbacks, such as the death of his father and brother and the realization that the family firm had collapsed when he returned after the end of the war. Being young and ambitious, Ferrari applied for a job at the Italian car manufacturer FIAT, but suffered another setback, after being rejected. Ferrari’s unsuccessful attempts to start working for FIAT lead him to the CMN racing team that were redesigning truck bodies into passenger cars.Ferraris success story began when he left the CMN racing team, where he had little to no initial success, to start racing for the Alpha Romeo racing team. Ferraris successes in the local races promoted him to become the head of the Scuderia Ferrari, Alfa’s racing team, where he started to develop a racing team that won only few victories, despite the high quality of the drives. Alfa Romeo withdraw their engagement in 1933, when financial constraints arose, which lead Ferrari to leave Alfa in 1937, after being demoted to director of sports. Enzo Ferrari had founded a company that supplied car parts to racing teams, when the Second World War began, where his company became involved in the war production. After the war, Ferrari founded Ferrari S.p.A., which is where the success story of the company Ferrari started to evolve. 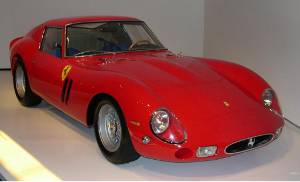 Enzo Ferrari started to participate in the Formula 1 World Championship with his racing team and produced sport cars as a secondary business in order to finance his racing endeavors. The very first road car that was manufactured by Ferrari was the 125Sport, which was powered by a 1.5 L V12 engine that helped the company to gain a reputation for excellence and luxurious cars. Enzo Ferrari’s leadership style and his strong personality allowed him to strengthen his racing team and his company. Ferrari’s heavy hand leadership style was exposed publicly when he dismissed some of Ferrari’s most important employees, such as his sales manager Girolamo Gardini, the manager of Scuderia Ferrari race team, the chief engineer and the sports car development chief amongst many others. The reason for this round of dismissals was internal tensions between Girolamo Gardini and Enzo’s wife Laura, who was also involved in the company. Enzo did not accept Gardini’s ultimatum to leave the company if the tensions would continue, as he regarded it as an attack on his authority and cleaned up the situation with his typical heavy hand. Ferrari had created his own rival as the defectors started to form a new company and many thought that Ferrari S.p.A. wouldn’t be able to cope the immense loss. However, Enzo Ferrari started to develop the 250 GTO, which became one of the most famous sports cars in history and won several championships, with the help of Ferrari’s young engineer Forghieri and his racing body man Scaglietti. Many cars like the Daytona, 275 and the 250 P were on the way.

It was in 1969 when FIAT started its engagement with a 50% stake investment in Ferrari S.p.A., which lead to an extension of the factory and the creation of new road cars. Enzo Ferrari retired in 1973 from his sports car racing team and died in 1988, which lead Ferrari to become a mythos. In 2002, Ferrari built the Enzo Ferrari, a 12 cylinder Berlinetta as an homage for the company’s founder.

Enzo Ferrari is a great example of how a person was able to establish a successful racing team and luxury car manufacture from scratch. Enzo Ferrari’s success story is a story with many setbacks that didn’t stop him to live his vision and to create a myth.

This article might also interest you: The Success Story of Ferruccio Lamborghini

What do you think, whose success story is more inspirational? The story of Ferrari or the story of Lamborghini?