You are at:Home »Comfort Zone »How to Think Outside the Box

“Start thinking outside the box and find a solution for this problem”, is a statement I often heard from my former boss and I guess many others are being told to do so as well, especially when the quality of ideas and solutions starts to decrease. What does it mean to think outside the box? Imagine you would be living in an invisible atmosphere that envelops your whole body, which is symbolic for the box you are living in (the box you will have to abandon when trying to think outside the box). Wherever you go the atmosphere surrounds you and protects you from the “real” reality, which is so complex that it would flood your sensory organs with masses of information that your brain couldn’t handle, if not filtered. All the information that tries to traverse your protective atmosphere will be filtered and selected and only the most important ones are being consciously recognized. The filter stands figuratively for your subconsciousness that filters all the information and erases or transforms them if necessary, dependently of your experiences, mindsets, attitudes opinions and the way you look at things in general.

Thinking outside the box means that you cast off the atmosphere that envelops you, step out of the box, leave all your experiences, mindsets and attitudes behind and start to view things from a completely different perspective: outside of the box; unfiltered, unbiased, open to suggestions, willing to empathize with others opinions, but also ready to swim against the flood and to think what no one else has ever thought of. It also means that you leave everything behind you thought you would know, everything that was thought to you in school and start to approach specific situations and problems from a completely different point of view than you did before.

For me, thinking outside the box does not only include all the above named, but also the openness not to stubbornly persist on my own opinion and to change the opinion I conceived when another person proves me to be wrong or mistaken. Sounds simple, but you wouldn’t believe how many people stubbornly persist on their own opinion and linger within their very own “box”, even if they are totally mistaken, but that’s also an ego thing. 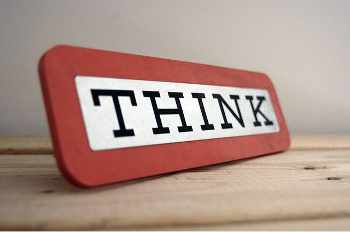 I think the above describes it pretty good what it means to think outside the box, however I would also like to show you an excellent example of a person who was clearly thinking within the box: Charles H. Duell, who was the Director of the United States Patent and Trademark Office, who said the following:

“Everything that can be invented has been invented.”

Duell’s statement is a fantastic example of thinking inside the box, par excellence. The quote, however, gets even more remarkable when considering that he made this statement in 1899, when people were still traveling by horse and train, long before automobiles, airplanes, jets, spaceships, microwaves, computers and mobile phones were invented.

How to think outside the box?

The ability to think outside the box requires above all one thing: creativity. Especially creative people have discovered the approach to “think outside the box” as an immense advantage for various facets of their lives, often as a characteristic that helps them to earn a living.

Slip into a new role

Thinking outside the box is all about changing your perspective and slipping into the role of another person can support you thereby. You don’t necessarily have to slip into the role of your parents, friends, colleagues and neighbors, as most of them might have pretty similar knowledge and opinions about the world as you have. Whenever I really want to change my point of view I slip into the role of a citizen of the 14th century. I deliberately start to view the world out of the perspective of a person who thinks the earth is shaped like a disc and has no clue about modern society.

By slipping into a new role you can change your perspective and the way you think about things drastically. You can feel free to take yourself some minutes to let your gaze wander through your environment and to discover all the new things you didn’t even notice before. If you are sitting in your living room you could pick up whatever looks interesting to you and discover the item all over again. You might even notice something about this item that you haven’t known until this moment.

Creativity is an essential aspect of thinking outside the box as it allows you to come up with completely different solutions to address a problem. The following exercise will help you to stimulate your creativity and encourage you to find another solution to accomplish a task:

Excellent, once you’re done you should have a challenging task and a ready-made step-by-step solution on how you would normally plan to accomplish the task. Thinking outside the box, however, means that you do not follow given instructions and mandatory paths, which is why you will have to accomplish your challenging task WITHOUT doing what you intended to do.

An altered version of this task would be to set yourself a challenging task and then to try to come up with as many different solutions to accomplish it. Try to push yourself whenever you are being stuck during this exercise to find some more solutions.

Step into another world

Stepping into another world is one of the most efficient ways to change your perspective and to discover insights that remained completely unknown to you. But how to step into another world, besides the quite expensive alternatives of traveling around the world or coral diving?

Something that amazes me is how often scientists, architects, and many others observe and analyze Mother Nature in order to come up with solutions for the problems they are facing. This method is called Biomimicry and means the examination of nature to find inspiration to solve a problem, or simply put: it is a fantastic out of the box thinking strategy by stepping into a different world. You do not necessarily have to start analyzing to all process of nature, but you could adapt this mindset and start searching for industries that might have come up with a solution for your problem!

Stepping into another world, in general, allows you to look at problems differently, which will also increase the possible solutions that start to come up.

Kids are wonderful, especially as they are often used to think outside the box (on a low level!) as they haven’t even heard of the possible solution, which forces them to come up with their own ideas before someone shows them how it is done. Just give it a try by simplifying a problem and get inspired by the creativeness of their thoughts. However, a child will not be able to solve your problem, but it can be the source of inspiration and give you some valuable ideas that you will have to enhance.

I really love to reframe things and to put them into another context. “The glass is half full”, would be the reframed version of “the glass is half empty”, with a completely different – and more positive – meaning. Reframing can also help you to step out of your box and to view things outside of the box; from another perspective.

Reframing gives you the possibility to change the meaning of a situation, task or problem. In general: it allows you to choose what it means for you, which gives you the freedom to change your point of view.

Galileo Galilei is a wonderful example of a person who questioned the status quo, “The sun revolves around the earth” that was prevalent at the time when he lived. Galileo was one of the most famous outside the box thinkers in due course. Not only did Galileo not accept what he probably had been thought at school and disagreed with the status quo, but also questioned something that was considered to be a fact. Start to question things and do not accept these as predetermined straight away. Don’t take the facts your teachers, professors, and experts present you as ultimately correct or the one and only truth. Make it a habit of questioning things and discovering new and even better solutions or facts about things.

The willingness to try things out does not only require courage but also the inner readiness to fail and to make a mistake. Whenever you are ready to search for the solution of a problem you have the chance to discover a way to solve whatever problem you face. However, if you aren’t willing to try you won’t find a solution, never. Mistakes are another great way to view things from another perspective, in fact: recognizing a mistake as an opportunity you can learn from in order to avoid it the next time is nothing else than outside of the box thinking. So many mistakes have helped people in many different ways, whenever they were ready to view it from another perspective. The next time you make a mistake, approach it positively: you can gain some new experiences, avoid similar mistakes the next time and you know what works not.

What is your strategy to think outside the box?